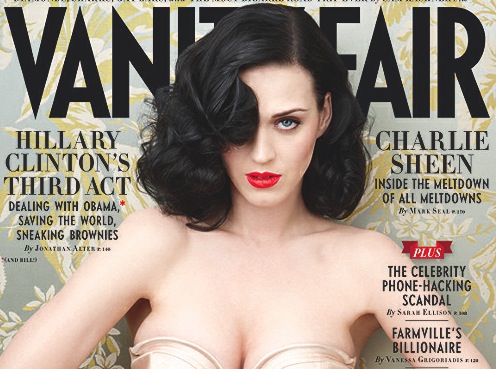 And now, the beginning of a new music year: Katy Perry released two new tracks from her forthcoming Prism album last night. They immediately went into the top 10 on iTunes. “Walking on Air” went right to number 1, with “Roar” holding strong at number 2. Another new track, “Dark Horse,” jumped to number 9. “Prism” isn’t released until October 22nd. But it does seem Perry’s people have followed the Taylor Swift pattern from one year ago.

“Dark Horse” didn’t do much for me. But “Walking on Air” is a strong track, again creating “the sound of triumph,” as I told you weeks ago about “Roar.” Perry’s production team is very smart. They showcase her strong, strong voice. And they write songs that are upbeat anthems. Katy Perry is no Joni Mitchell or Carly Simon. There’s no time for introspection. She is “Walking on Sunshine” 24/7, lest her teen followers feel let down. It would be so interesting to hear her sing real songs with a real producer. But I doubt that will happen any time soon. In the meantime, it’s all good.

Miley Cyrus’s “Bangerz” album is streaming on iTunes. It’s not very interesting. I really liked “We Can’t Stop.” But the rest of “Bangerz” feels tired, hackneyed, anonymous. You can only push the naked thing so far. At some point there have to be records. Miley has ‘duets’ with Britney Spears and with Nelly. Right away, you sort of feel manager Larry Rudolph used her to push other clients. And not very hip ones. (I liked Nelly’s “Suit” album, don’t get me wrong. But it was a long time ago.)

Streaming the whole album now may be a mistake. It might have been better as a surprise. “Bangerz” goes on sale Oct. 8th. One thing: a couple of times you can hear her actual ‘country’ style voice come through. That’s her natural style. And that’s where Miley should be headed as she gets older. She’s forcing this “female rebel” thing.