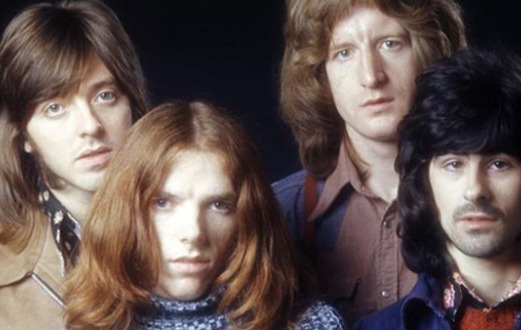 Holy moley, as they say. Badfinger‘s lost classic of an album, “Straight Up,” is back on the charts. Thanks to the “Breaking Bad” finale use of “Baby Blue,” the album and the single are hits. On the Beatles’ Apple Records. “Baby Blue” is number 10 on amazon.com and number 13 on iTunes this morning.

The album is at 94 and 99, respectively. For people who buy the album and have never  heard it before, you can only imagine what they’re thinking. “Straight Up,” produced by George Harrison and Todd Rundgren, is a mini masterpiece. It contains the still fresh sounding masterwork single, “Day After Day.”

I know everyone is crazy for Vince Gilligan because of the TV show, but I have to thank him for this. It’s been 41 years since “Straight Up” came out and it sounds better than ever.

Entertainment Weekly found Joey Molland, the only living member of the group, right after “Breaking Bad” aired. He had no idea the show was using the record but sounds pleased. He has a new CD of his own coming out in November.

“Baby Blue” was written by Pete Ham, who took his life after a long bout of depression. As a lot of fans have written in, Badfinger was plagued not by drugs but by bad management. They had long court battles, were ripped off, and it eventually all took a toll.

PS It was Peter Asher at Apple who discovered Badfinger. When he does his entertaining one man show, Peter brings along a Badfinger replica band. They play “Day After Day.” Now they may add “Baby Blue.” Peter always had great ears– he also discovered James Taylor.