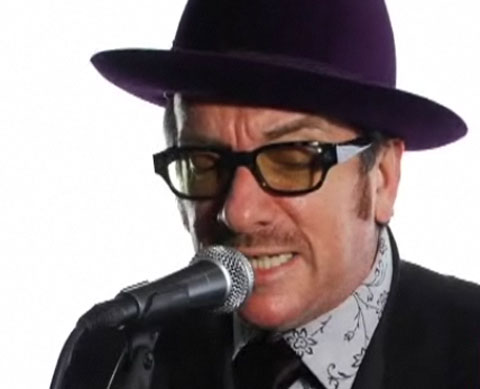 Joan Baez- a living, dancing, singing legend– and Elvis Costello– bard of New Wave rock– were the unlikely but perfectly matched headliners last night at Town Hall. The occasion was a concert to celebrate the folk music themes of Joel and Ethan Coen’s soon to be released movie “Inside Llewyn Davis.” T Bone Burnett– who’s just produced Elton John’s wonderful new “Diving Board” album– organized the evening with some of the movie’s stars taking part.

Oscar Isaac, a much buzzed about possible Oscar nominee, I think stunned the crowd by more than ably performing songs from the film and traditional songs with many of the professional musicians. Carey Mulligan sang and introduced acts, including husband Marcus Mumford. John Goodman, wearing a cowboy hat, was the unofficial emcee of the night. The whole thing was taped for a broadcast on Showtime on December 13th.

It was the rare time a promotional event transcended its purpose and rose to magical heights. The show was more bluegrass and country than actual folk of the Coens “Llewyn Davis” era, a kind of sequel to the Coen’s D.A. Pennebaker-Chris Hegedus directed documentary “Down from the Mountain.” Each act was perfectly curated by Burnett so that one after another it seemed everyone had stolen the show.

There were some standouts among the lesser known performers. In particular, the crowd went gaga for Rhiannon Giddens from a group called Carolina Chocolate Drops. This gorgeous young woman can sing and belt like a Broadway performer, plays an amazing fiddle, and is hot hot hot in a red dress. Trust me when I tell you she is about to explode. The CC Drops already have a Grammy from last year in folk music, but Rhiannon could take them much farther. They are signed to Nonesuch Records.

The other big revelation was a little known group that started in Boston and now straddles that city and New York. They’re called Lake Street Dive, and they’re fronted by singer Rachael Pearce.