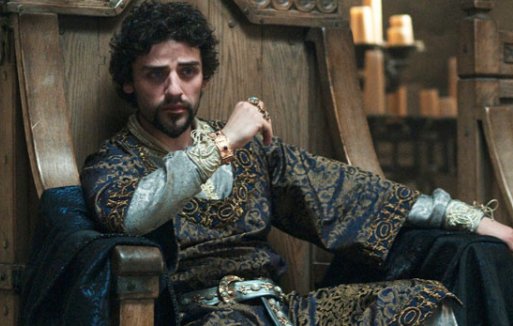 Oscar Isaac has suffered a lot of indignities in his short career. He was one of the few bright spots in Madonna’s “W.E.” A great movie in which he starred, called “Bilabo,” was never actually released and had to be put on YouTube in pieces. “Agora,” in which he also acquitted himself well, also fell by the wayside. He was one of many talented actors no one could see because of the poor lighting in “Che.” But intrepid manager Jason Spire knew Isaac’s secret weapon: he was a damn good musician. Now Oscar is the star of the Coens’ “Inside Llewyn Davis.” And he’s going to get an Oscar nomination.

All of that was pretty clear from this weekend. The movie screened Saturday night at the New York Film Festival to raves. And then on Sunday night came the live concert at Town Hall in New York. Amidst a sea of professional musicians, Oscar Isaac emerged as the night’s big star. He was almost its most gracious. As he strapped on a guitar last night, Isaac was the only singer of the evening to marvel at all the talent around him. Then he knocked the audience out with four performances. If he does just a little of this for Academy voters, he’s in. The public will get to see him on Showtime’s special about the concert on December 13th.

Just a note that Oscar could easily have a hit single with Bob Dylan’s very early traditional “Dink’s Song” also known as “Fare Thee Well.” He sings it in the movie as Llewyn Davis and sang it last night. He’s going to be doing it a lot this winter, by request.

Meantime, last night’s audience was filled with stars, from Julianne Moore and Bart Freundlich (with their kids) to Paul Rudd, Zooey Deschanel, Nina Arianda, Chris Rock (who came just to the after party at the Bowery Hotel), Jesse Eisenberg, “Moneyball” director Bennett Miller and even a very low key Liam Hemsworth. CBS’s Les Moonves and Julie Chen entertained David Geffen. Joel Coen’s Oscar winning wife Frances McDormand showed up with some pals. Neither Joel nor Ethan Coen nor McDormand participated in the show.

And the breakout music stars– they included Lake Street Dive and the Punch Brothers, the Avett Brothers, Gillian Welch, and Rhiannon Giddens. Rhiannon needs to wear her red dress and no more pigtails. She is one step away from being a star. At the after party at the Bowery Hotel, Rhiannon got into an impromptu jam session with Joan Baez and members of the other groups. They were just spectacular. What a relief last night to hear real musicians. No Auto Tune, sampling, or lip synching. No artifice. Just the real deal. Four stars!