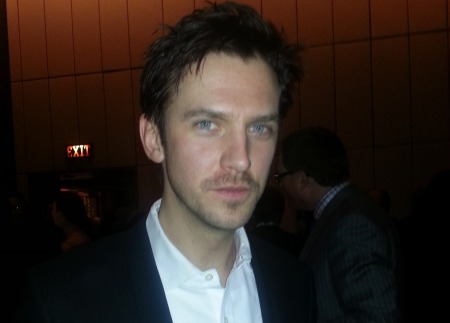 Sunday night in Britain: “Downton Abbey” returned for Season 4 with a huge 9.5 rating, up almost a million viewers from the UK season premiere. The show picks up six months after the death of Matthew Crawley, played by Dan Stevens. Viewers no doubt were curious to see what happened to Lady Mary and her baby. “Downton Abbey” season 4 doesn’t start in the US until January 5th.

Last night at the Emmys I talked to my old pal Julian Fellowes, the brilliant mastermind behind “Downton.” You know, the seeds of “DA” were in his Robert Altman film, “Gosford Park,” which every “Abbey” fan should rent or buy to see how all this started.

Fellowes was not pleased when Dan Stevens decided not to return as Matthew after three seasons. “We begged him to stay one more week, and film the Christmas episode. We could have a happy ending for Matthew and Mary. Then we would have started season  with his death. But refused. To come back for a week!”

Despite killing Stevens’ Matthew off most graphically last year, Fellowes still wishes him well. Still: “I really think if he’d waited one more season, he would have left with a bigger following.”