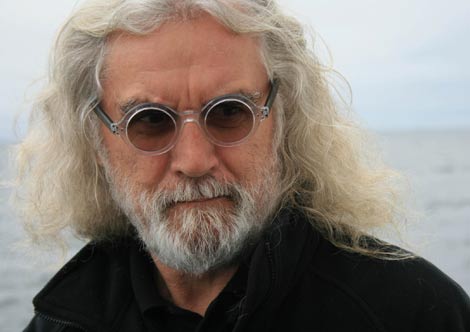 Billy Connolly, 71, the comedian and actor who co-starred with Judi Dench in “Mrs. Brown,” has posted an update about his health on his website. Connolly says he’s had successful surgery for early stages of prostate cancer. He’s also been diagnosed with Parkinson’s Disease. Connolly appears in the upcoming second and third “Hobbit” movies. He’s a popular actor and performer who never stops working, and is much in demand. Connolly’s been married to British actress Pamela Stephenson since 1989.

He’s such a nice guy, we wish him a speedy recovery. Here’s the statement:

“Billy Connolly recently underwent minor surgery in America after being diagnosed with the very early stages of prostate cancer; the operation was a total success, and Billy is fully recovered.

In addition Billy has been assessed as having the initial symptoms of Parkinson’s disease, for which he is receiving the appropriate treatment.

Billy has been assured by experts that the findings will in no way inhibit or affect his ability to work, and he will start filming a TV series in the near future, as well as undertaking an extensive theatrical tour of New Zealand in the new year.”