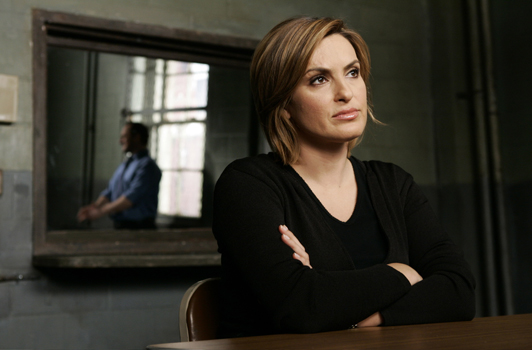 EXCLUSIVE “Law & Order SVU” will be doing the Anthony Weiner sexting story this season, executive producer Warren Leight told me last night. “L&O SVU” always puts a spin on their stories, so their Weiner will be Hispanic. He may still fight with Orthodox Jews in a Brooklyn deli. But the show isn’t sure if it can get away with an ending of their Weiner giving the middle finger to his voters.  He will definitely be sexting young girls.

I was told all this last night at a small screening of the new season’s premiere episode of “Law & Order SVU.”  Emmy winner Mariska Hargitay hsoted the evening with executive producer Warren Leight. Richard Belzer was also present at the Bryant Park Hotel screening room, along with writer-producer Julie Martin, who wrote the harrowing episode with Leight. Alec Baldwin popped in just before the the lights went down.

When we last saw Olivia Benson, a crazy rapist killer psychopath played by Pablo Schreiber was holding a gun to her head. As Leight said before the screening: “We didn’t know if we were being renewed, so we wanted to give NBC incentive to bring us back.” It’s the 15 th season for the popular show.

Benson and Schreiber go through five “acts” and we saw it all without commercials. You’re unlikely to find anything else this intense on network TV or cable this season. Suffice to say Benson makes it out alive, but the episode is a psychological thriller that will take your breath away. The episode is called “Surrender Benson,” and it features the whole “SVU” crew pulling together including Belzer, Ice T, Kelly Giddish, Dean Winters, and Danny Pino.

The show airs on September 25th. Hargitay, who is beautiful even when she’s being kidnapped and tortured, told me: “This was the hardest work I’ve ever done.” And that’s saying a lot after 15 years. How does she put it out of her mind when she gets home? “I don’t know,” she replied. “You just have to.” She happily took pictures with her castmates and Baldwin, and danced around in a hot red dress.

I also ran into Hargitay’s actor husband, Peter Hermann, who appears on the show from time to time as a lawyer. Hermann is featured in the new Judi Dench movie, “Philomena,” which will get a big Oscar push this fall. “You just fall in love with her, she’s so cute,” Hermann said of Dench.