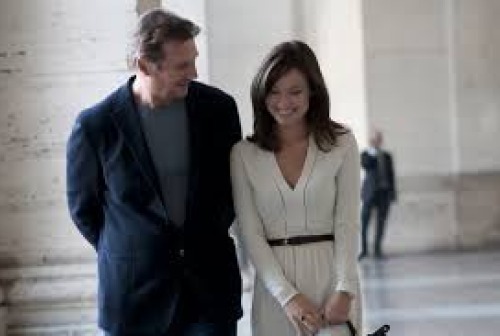 You may recall I wrote about Paul Haggis’ “Third Person” back in May after I saw an early cut. Yesterday Haggis presented his final version in Toronto and it is even better, a sort of magnificent jigsaw puzzle that combines “Crash” and “Memento.” I can’t wait to see who buys it. “Third Person” is a big winner.

Like “Crash,” “Third Person” is a group of stories interlinked. Like Chris Nolan’s “Memento,” it’s also about clues. You will want to see this movie a couple of times to figure out what you missed.

Basically, Liam Neeson plays a writer who’s moved to Italy or is at least workin there. His wife, played by Kim Basinger, is in the U.S. They are grieving the loss of a child. Olivia Wilde arrives at Neeson’s hotel; she’s his mistress and she has a lot of secrets. That’s the main story and these actors are terrific. It’s Liam Neeson’s best work in years.

But then there are other stories that include Adrien Brody and (stunning) newcomer Moran Atias, Mila Kunis and James Franco, and Maria Bello. How the stories link up, the relationships, all of it is really fascinating. I don’t want to give away the story (if I’ve even cracked it) for now. Suffice to say, “Third Person” is the most clever film of this festival. If it’s marketed correctly, I expect it will take off like crazy.

And just to praise Haggis: not just Neeson but everyone seems like they’re on their game here. Adrien Brody is sensational. And Mila Kunis has never been better. Franco benefits from letting someone else tell him what to do. And it’s a pleasure to see Kim Basinger. Maria Bello– I can’t be objective, I think she’s great.

So good news from a totally independent project.