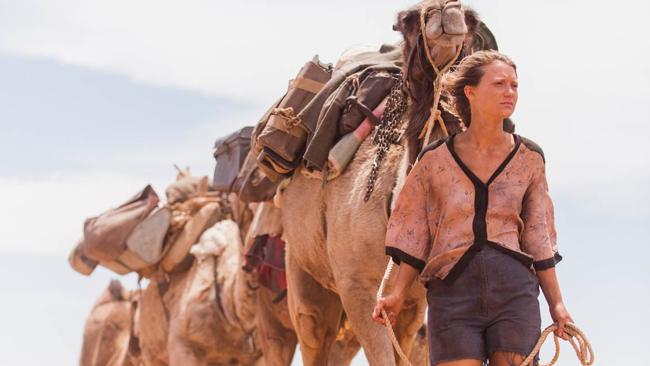 Toronto: on a long day, the good news was that my final Toronto film was John Curran’s “Tracks.” The Weinstein Company, in an effort secure 2015 Oscars, bought this before the Venice Film Festival. Produced by the guys who brought us “The King’s Speech”– Iain Canning and Emile Sherman– “Tracks” is absolutely stunning. Mia Wasikowska stars as real life adventurer Robyn Davidson.

In 1977, Davidson trekked across the Australian desert with her dog and four camels. National Geographic sent photographer Rick Smolan, who dropped in and out of the two year, 1700 mile journey. They had a little fling, but mostly it was professional. The result was an award winning report that turned into a bestselling book and now this movie.

“Tracks” probably won’t get released until a year from now, which is too bad. Wasikowska is utterly brilliant as Davidson, and Adam Driver of “Girls” – who’s in a bunch of movies– is perfect as Smolan. He also looks just like him. The camels are outrageously charismatic, too. Davidson had a wonderful dog with her, too, who is so winning that the dog actor who plays him should get a Best Supporting Actor nomination. We were told, however, that there were two dog actors, and they were very difficult. They will not be doing press junkets.

Earlier in the day I walked right out of “The F Word” starring the very likeable  Daniel Radcliffe and Zoe Kazan as friends who keep denying a romance. Rafe Spall co-stars. All the actors were fine. But the language in this movie– the utter coarseness of it– was so inappropriate and grating that I actually said out loud, “Stop talking. Please stop talking” to the screen.

Why? WARNING There was extensive talk of blow jobs, dicks, and some other act that I can’t include here about pleasuring a woman expressed in the most vulgar way. Look, I can’t do it. I have too many years of higher education. I really don’t think twentysomethings speak this way to each other except in some idiot screenwriter’s fantasy. It’s the laziest sort of writing. It’s unacceptable in a romantic comedy for any generation.

This is what a screenwriter should say to himself: “If Woody Allen, Nora Ephron, Nancy Meyers, Jim Jarmusch, Ethan Coen, Jerry Seinfeld, etc won’t do it, than I won’t do it. Period.”

The F in The F Word is for fail. Plain and simple.