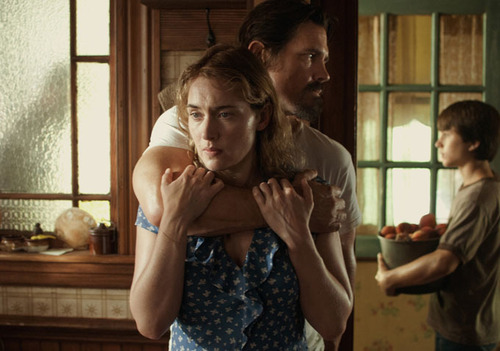 Since nothing should be without a J.D. Salinger connection: Jason Reitman’s “Labor Day,” which got its press outing this afternoon in Toronto, has one. It’s based on a novel by Joyce Maynard, who had an affair with Salinger when she 18 and he was 53. It’s an infamous story, and one which is included in the new “Salinger” film opening this weekend.

Reitman made the lovely “Juno” and the very pungent “Up in the Air,” two of my favorite films (and maybe yours, too). His last outing was with Charlize Theron in “Young Adult,” an ambitious movie that didn’t quite work because the main character (Theron) was so unlikeable.

“Labor Day” stars Kate Winslet and Josh Brolin with a cameo by James van der Beek. It is not an Oscar movie but it may be a commercial hit. The material is a little unusual for Reitman in that it is tepid and conventional with no real twist or “ah hah!” moment. Pretty much what you think will happen does, and that’s fine.

Reitman directs the hell out of every scene, and the actors are all top notch, especially Gattlin Griffith, the 12 year old who plays Winslet’s son. Basically, it’s a love story between two unlikely types: Winslet is a lost soul divorcee who allows Brolin, an escaped convict, into her home. He’s been in jail for murder, but guess what? He’s a master chef, carpenter, and lover. He plays ball with her kid, and likes kittens. Frankly, who cares if he killed someone or many people! He’s too good to lose.

Brolin spends Labor Day with mom and son, and they plan to run away. It’s 1982, so there are no cell phones or web alerts. Just occasional TV spots that say beware this dangerous man. Meantime, he’s cleaning the gutters and chopping scallions.

Of course the Brolin character has a sad back story, his incarceration is explained. But it’s the stuff of “The Notebook,” and not very convincing to a cynic like yours truly.

In the end “Labor Day” will play like a very intense chick flick. Everyone comes out of it unscathed. But it’s time for Jason Reitman to get back to edgier material.