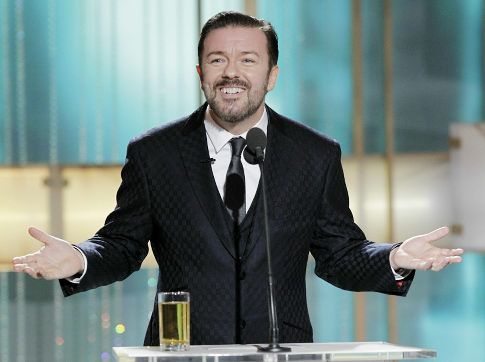 EXCLUSIVE: On the red carpet at the premiere Thursday night at the Museum of Modern Art of Netflix’s new series “Derek,” written and starring Ricky Gervais, I asked the comedy genius behind “The Office” and “Extras” about reports [in the UK Sun and picked up elsewhere as fact] that he is going to take David Brent and bring his guitar on the road to play with pal Chris Martin of Coldplay on their next tour. (Currently Gervais’ Internet series, “Learn Guitar With David Brent,” is on YouTube.)

“No,” he said. “They’re actually going to play with me at a charity event. But I don’t know if that’s gone out because it’s a secret, so I don’t know where that came from.”

Gervais is a big animal lover who raises money for pet charity groups.

“Derek,” starring, written, directed and executive produced by the Emmy and Golden Globe award winner, is a very personal project for Gervais. He plays Derek, a gentle 50 year-old man who is an assistant at an old age home. Derek loves his work and the elderly people whose toenails he clips and hands he holds.

“It’s slightly more sincere than my previous work. In fact, it’s more sincere than most comedies,” Gervais told me. “ I’ve always snuck in pathos and drama in my work. You know ‘The Office’ wasn’t out and out comedy. It was about a man having a mid-life crisis.  It was a love story. ‘Extras ‘was about people who were friends. Fame interfered with their friendship,” he said. “The backdrops here is sort of sweeter, has more gravitas.”

The show has generated some controversy in England where critics say the show makes fun of the mentally challenged; Derek is often slack jawed and has facial tics. He may also have autism.

“I don’t think it’s controversial at all,” Gervais said of the show. “I think it’s incredibly sincere and sweet.”

There’s situational comedy, but Gervais is going for tears too. I cried as much as I laughed I told him. “That’s exactly right,” he said. “I think people are surprised about crying at a sitcom. But I don’t think it’s an obvious sitcom. I think it’s a comedy drama, just a very sweet little goofy show about some outsiders, and it’s quirky and very honest.”

As for who inspired Derek, he told me, “I suppose its sort of me, before you become aware,” he said. “He’s quite childlike and innocent and it’s going against all the cynicism. I’ve done like 10 years exploring fame in my work and I wanted to get back to ordinary people.”

The backdrop for the show he said were the people in his own family who were caregivers. “I’ve got years and years of stories from my mum, my sister-in-law, my sister, my niece and nephews now have gone into working in care homes, so I always try to write about what I know and they’ve told me stories I’ve been laughing at and crying at because it’s so sweet. They told me a story once, I can’t, it makes me well up,” he actually choked up a little trying to tell me a story one of his family members had told him. “An old man was sitting with his wife who was dying and he was singing, ‘You Are My Sunshine.’” Beat.  “I might do that in the show. How sweet is that? It’s just, uh!” He looked verklempt and put a hand on his heart.

Finally I asked about the inspiration for Derek’s shlubby caridgan  and his long hair, which he combs  down over his forehead. He sort of resembles Moe of the Three Stooges

“I love it. Yeah. It’s good,” Gervais said. “I’d walk around in sweatpants and a jumper with my hair forward all day if I could. It’s so refreshing.”