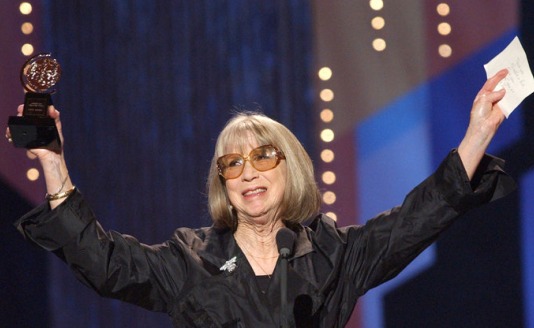 Flashback to “Knots Landing,” the nighttime soap that ran for 14 years and still holds up. Julie Harris was a regular on the show from 1980-86 playing Valene’s (Joan van Ark) mom, Lilimae. Michele Lee, who played Karen MacKenzie for all 14 years, told me this morning that she visited Harris just last year at her Massachusetts home.

“She loved to read,” Lee says. “She had a giant magnifying glass that swung over her chair. She was voracious. And you know, she was older, but she didn’t look much older. She had that impish smile. She had a childlike joy.  And she insisted on walking us out when our visit was over.”

Lee recalls that Harris felt incredibly guilty one day on the set of “Knots Landing.” I was just about to go on–we were working in Joan’s living room set– and the phone rang on the set. Julie picked it up. It was my assistant at home and she had to tell me our beloved Dalmatian had died. And Julie had to tell me just as I was going.  And she was so upset. She kept saying, I’m so sorry, I’m so sorry. She really meant it. I’ll never forget it.”

Harris, Lee says, should be remembered as a comedic as well as dramatic actress. “On our show she did light comedy. She shined as a comedic actress.” Harris also had a great friendship with the late Charles Durning. “They were extremely close. They performed “The Gin Game” together a lot. And one of the things Julie said she missed the most after having her stroke was not being able to do The Gin Game with Charlie.”

And for all the gossip in Hollywood and on Broadway, Lee gives the highest praise: “Julie was a lady. She never said a bad word about anyone.”