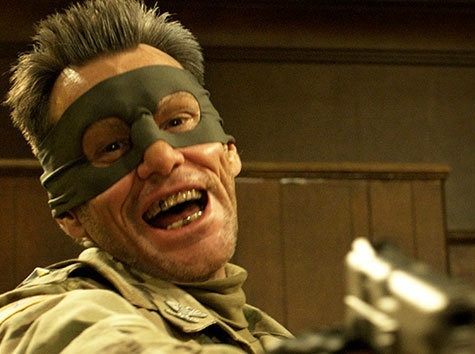 The box office this weekend did not produce happy results for the people behind “Kick Ass 2.” The reason was likely Jim Carrey, who was added to the sequel with the hopes that he would garner publicity for the film. Let’s rewind: “Kick Ass” had a $19.8 million opening in 2010, and went on make $96 million worldwide (literally $48 mil here, $48 mil everywhere else). It was a left field hit for Lions Gate.

Carrey was brought in for the sequel, which was directed Jeff Wadlow–the nephew, by the way, of Katie Couric.  Adding Carrey in a showy role meant a news hook when the movie was released. But then the shootings in Newtown, Connecticut happened. Carrey took them to heart– yes, it was awful, but it had nothing to do with “Kick Ass 2.” Carrey began denouncing the movie, and said he couldn’t promote its violence in light of the shootings. He was gone. And with him went any chance of “Kiss Ass 2” doing better than its predecessor.

Alas, “Kick Ass 2” was kicked in the ass by Lee Daniels’ “The Butler” this weekend. The Wadlow film finished fourth, after “We’re the Millers” and “Elysium.” it took in $13.5 million– far less than the first “Kick Ass.” Its momentum has been blunted. Carrey, whose career doesn’t really exist in a meaningful way anymore, has been AWOL. It will be interesting to see how the dozen or so producers on the film– including Brad Pitt, Matthew Vaughn and his wife Claudia Schiffer, plus Mark Millar–respond to the situation. They tried to spin last week saying Carrey’s protest of the movie was going to help them. Now that it hasn’t, they may be singing a different tune.

I did Kickass a month b4 Sandy Hook and now in all good conscience I cannot support that level of violence. My apologies to e

I meant to say my apologies to others involve with the film. I am not ashamed of it but recent events have caused a change in my heart.