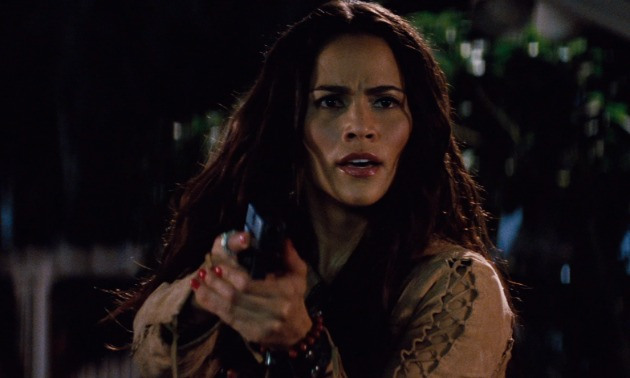 Ryan Reynolds is very much in the movie world right now, what with “RIPD” and “Turbo” each in release. Of course, they’re not exactly hits, per se, but Reynolds is handsome (obviously), affable, and nice. Eventually this will all work out. His next film is called “Self/Less” and it’s going to be directed by Tarsem Singh. I’m told his co-star will be beautiful, talented Paula Patton, recently invited to join the Academy and the wife of this summer’s pop star extraordinaire Robin Thicke. (His “Blurred Lines” hits the charts today at number 1.) Patton is in this week’s number 1 film, “2 Guns,” with Denzel Washington and Mark Wahlberg.

“Self/Less” sounds like one of those movies I dread and maybe you do, too: an old man somehow gets his soul and persona transferred into that of a young man. Yippee! Hilarity ensues. Patton is the wife of the younger man. Maybe it will be clever and funny. We can only hope. The only film like this that ever worked was Steve Martin and Lily Tomlin in “All of Me,” which remains a brilliant comedy. Otherwise, these things have been done to death.

Before Reynolds got abs, he was a good comic actor who sounded clever and wry ripostes. What he really needs is a  kind of “Moonlighting” vehicle, something in which he can do some verbal jousting and be a little charming. “RIPD” didn’t do it. He does have a promising project in the works: “Mississippi Grind,” written and directed by Anna Boden and Ryan Fleck, produced by Jamie Patricof. Cross your fingers. Reynolds and Ben Mendelsohn (“Greetings from Tim Buckley”) play gamblers working casinos in the South.