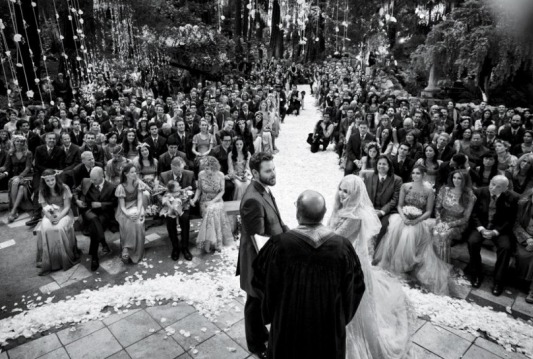 Even I don’t know what to say, so here it is: Sean Parker, the guy who destroyed the music business with Napster and then went on to help start Facebook, had this colossally nervy wedding in Big Sur. It resulted in all kinds of fines and donations to nature conservancies totaling $2.5 million. Now Vanity Fair has the story and pics from the Middle Earth bacchanal. Sting, as well as Edward Sharpe and the Magnetones, was hired to preform. (Ka ching!).

The guests included “friends” like Emma Watson, Olivia Munn, and Sean Lennon. Facebook co-founder Mark Zuckerberg did not attend. Mark Seliger took portraits of the guests, which are very nice. The pictures of the setting are astonishing, and frankly the whole thing looks like “Lord of the Rings: Walmart Edition.” But it’s quite a scoop, and a tale of American Gatsby in 2013. www. vanityfair.com.

Now the Parkers and their baby settle into their $25 million carriage house in the middle of my block here in Greenwich Village, where their mega SUVs are the constant topic of conversation from neighbors who are dealing with alternative side of the street parking. Like? Follow?