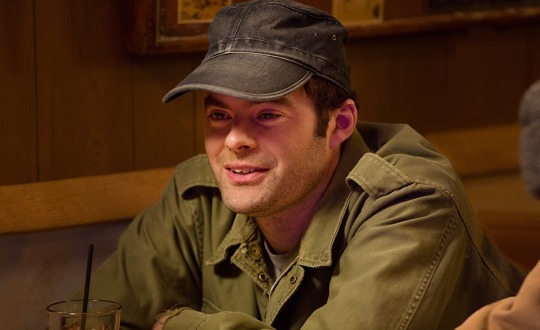 The party was typical HBO terrific, with a carnival, Ferris wheel and to top it off, the great band “Chicago,” played for the VIP crowd. The band is a running joke, albeit very sexually naughty, throughout the film. The film was shot around David’s summer home in  Martha’s Vineyard.

When you think of Anthony Weiner, you think that the recently departed SNL veteran  Bill Hader would play him the best.  But Bill was diplomatic about the whole deal and gave kudos to SNL’s current cast.

Hader said: “There are a lot of people on the show now who are so talented and could play him. Taran Killam could do it, others can. But really, it’s kind of hard to parody something that is so out there, meaning completely crazy,  already.  SNL couldn’t make Carlos Danger up.  Truly, you just can’t make this stuff up. It’s pure comedy gold.”
We asked about working with Larry David.

Bill replied: “I thought he would be intimidating cause he’s a comedy God , but I was happy to find out he’s such a great audience, he laughs a lot on set. There is nothing like making Larry David laugh.”

Jeff Garlin started the night off with the biggest unintentional laugh as the red carpet was shown on the Cinerama Dome in Hollywood as the audience waited for the movie to start.  Jeff wandered on the carpet and beamed into the camera making Larry David, who was inside, along with the audience, howl with laughter.  Jeff later told us, “All I have to say is that anytime I’m even near Larry David, it’s an honor.”
Larry David bopped to the band and told us that, “I had great, great time making this movie. Fun to work with everybody.  Good to do!”
The talented Director Greg Mottola told us that: “We all did this a labor of love to work with Larry. When it comes to comedy, he’s a true genius in every sense of the word.”
Clear History premieres on HBO This Saturday at 9 pm.