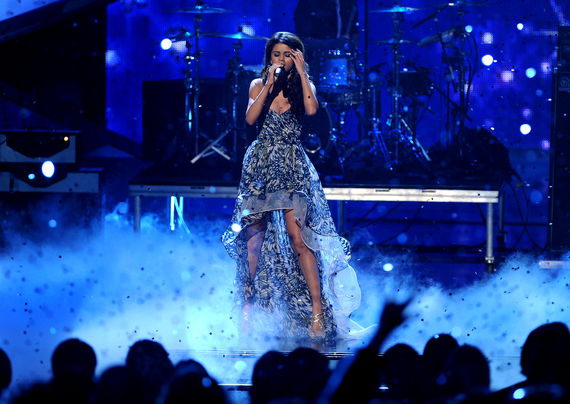 Selena Gomez has her first number 1 album. It’s called “Stars Dance.” Her third album, it sold 95,514 copies– almost 20,000 more than her previous album. And that one had the single “Love You Like a Love Song.” which I really liked. In getting to number 1, Gomez knocked off Jay Z’s “Magna Carta.” She will get just this week at the top of the charts because Robin Thicke is going to be there next Monday with his “Blurred Lines” album. PS I have the “explicit” version and wish I had the clean one.

If you haven’t gotten in the Thicke of it yet, don’t wait: his album is superb, and merits a Grammy nomination for Album of the Year. I can’t stop listening to it, especially “Ain’t No Hat for That.” I do hope the Marvin Gaye estate is getting some money from the “Got to Give it Up” sample in the title track. But otherwise, “Blurred Lines” is a summer homerun.

Back to Selena: how the heck did she score number 1? Well, “reuniting” with Justin Bieber thrust her back into the spotlight coincidentally at just the right time. During Grammy time, Gomez wanted nothing to do with Bieber, and was out and about on her own.

You couldn’t blame her. She’s 21. He’s 19 and acts like 12. He spits on fans, spits at fans, is almost wallpapered with tattoos and can’t find the right sized clothes. Their sudden reunion seems like a marketing ploy. It worked. Hey, whatever works!