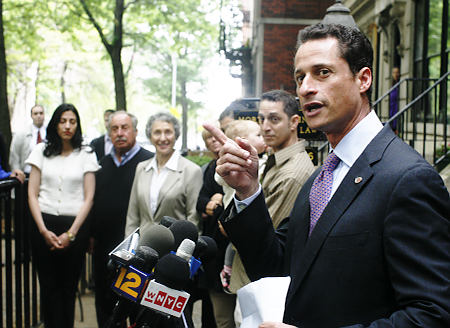 Both the New York Times and the Daily News have published editorials today denouncing Anthony Weiner. They each say he must get out of the mayoral race. He lacks all credibility now. His wife, Huma Abedin, seems like she’s lost her mind. Unfortunately, reading Weiner’s latest sexts to the 22 year old woman in Indiana are pretty clear: they are as pornographic as something from Penthouse Forum. Well, he has a knack for this, and for emailing pictures of his penis. But that does not make a mayor. Anthony Weiner is an embarrassment to the city of New York. There’s no way he could represent us anywhere, anytime, except maybe at the adult film movie awards. No matter what our past mayors have done– and I am referring to Rudy Guiliani’s public and guilt free philandering–nothing has been this bad. Weiner shows no moral compass, of course. But he also has no conscience. He wants a ‘second chance.’ Hey–hey got a second chance last year. There is no third chance. Out, now.