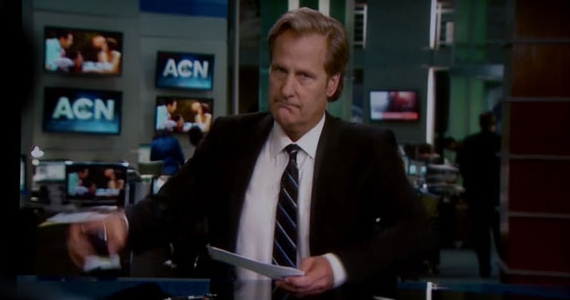 “The Newsroom” plowed into his second episode of Season 2 with a couple of agendas. Mostly Aaron Sorkin, who did write “The Social Network,” wandered more fully into the internet. Blogging, to be specific. And I’ve just a great Twitter conversation with Emily Nussbaum of The New Yorker.

This is what I came away with: Sorkin has put YouTube and blogging at the heart of Maggie  and Don’s breakup, and Maggies romantic problems. She was caught on video, and the video was posted. She found the blogger, tracked her down to a Queens laundromat, made a deal, and was screwed. The blogger, who writes fan fiction about “Sex and the City” (still, after all these years) was depicted as combative, dumb, and representative of her generation.

Meantime, Charlie insists that one of the news shows runs a Twitter feed on a zipper along the bottom of the screen during a news show. And Emily Mortimer’s MacKenzie mocks Neal (Dev Patel) for trying to cover Occupy Wall Street, which is growing exponentially thanks to YouTube and social media.

Meanwhile, Gerry and the Genoa story are proceeding, that’s the main story of the season. It’s unclear whether it holds water yet.

That’s dead on. Last week, Jane Fonda’s Leona described bloggers as “pajama people.” maybe my favorite line of the summer. I regret that I agreed with all of this as it was spoken. It’s generational, as Aaron Sorkin are close in age. But Nussbaum has a point, and this is why “The Newsroom”  feels more like “Lou Grant” than something from 2013. I keep waiting for Mason Adams as editor Charlie Hume to walk in and have it out with Lou and his staff.

But the good news: Grace Gummer joined the show tonight as a correspondent for a rival network. She is sleekly wonderful. I hope she and Jim hook up, and we see a lot more of her. Also Chris Chalk is getting more to do. (his character’s name is Gary Cooper!) You know the Africa trip will be a tragic disaster. Olivia Munn is the breakout actor of the first two episodes. I’d like to see more of Tom Sadoski and Jane Fonda (crossed fingers).

Even if you hate the show (which was poked fun at tonight), Jeff Daniels is doing an amazing job. Will McAvoy is not easy. Daniels is superb.