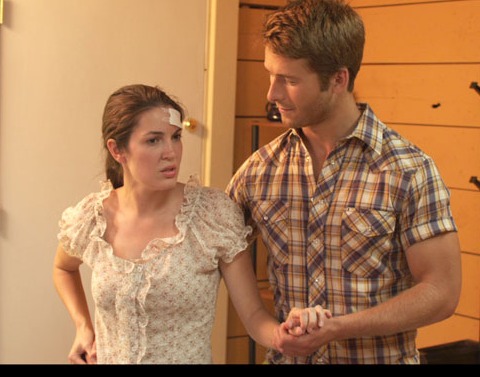 Terrence Malick–his story just keeps getting weirder and weirder. His latest movie, “To the Wonder,” was completely unwatchable. It made slightly more than a half million dollars. Ben Affleck spoke not a word in it. Before that, Brad Pitt and Jessica Chastain spoke not a word to each other in the alternately interesting and extremely confounding “Tree of Life,” which was the Emperor’s new Clothes. Sean Penn is still wondering what he was doing in that movie. So are we.

Now Malick has executive produced a film for his stepson, Will Wallace. Will is the son of Malick wife Alexandra “Ecky” Wallace. “Red Wing” is based on a novella by French literary giantess George Sand called “Francois le Champi.” The story is one of incest, which seems to be hammered home in the new clip for “Red Wing.” A young married mother takes in a homeless little boy. Her husband gets rid of him when he’s older because the mother-son relationship is too close. Later, the kid, now a hunk played by Glen Powell– billed as the last actor signed by Ed Limato– comes back and romances and marries the foster mother.

Wallace has moved this all to Malick’s Texas, where there are many beautiful shots of the flora and fauna, and knowing unspoken looks among the various players. Luke Perry plays the cuckolded husband who doesn’t like what he sees between his wife and the boy. Let’s hope this comes to Toronto. Last year “To the Wonder” played there, and it was a memorable screening.