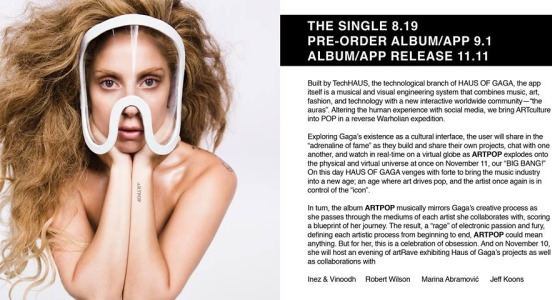 Remember when I told you Lady Gaga’s album “ArtPOP” would come in November? http://www.showbiz411.com/2013/02/12/lady-gagas-new-album-wait-until-november. Today she announced it on Facebook. A single will arrive on August 19th. Gaga is recording a duets album with Tony Bennett right now. She won’t finish “Art POP” until after that. This does mean that only the single will be eligible for Grammy awards on January 26th. The album will have to wait until 2015. Lady Gaga aka Stephanie Germanotta is very talented. I really wound up liking “Edge of Glory.” But let’s hope the new songs take her away from sounding like Madonna, and are more like “Just Dance” and her earlier, more original hits.