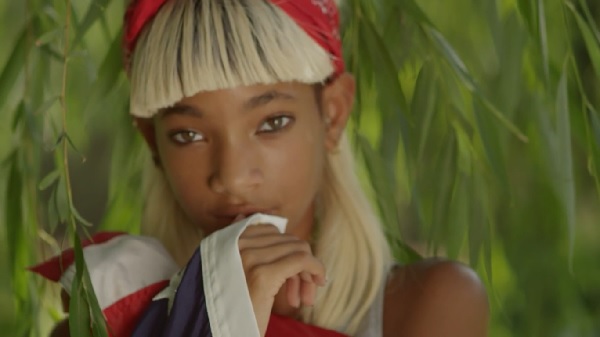 Willow Smith, daughter of Will Smith and Jada Pinkett, is 12 years old. Her new video is called “Summer Fling.” It features Willow hanging out an upscale swimming hole with kids at least 16 or 17 and up. She seems to be romantically involved– in the video– with a guy who looks twice her age.

Willow, sister of “After Earth” flopped star Jaden, finishes the video by looking as suggestively as she can at the camera. What the heck is going on here? Willow was homeschooled, then sent to her parents’ New Village Academy. Now the school, as I reported, has closed.

And this is what she learned there: how to cavort with near adults in appropriately on film. Jaden is shown in the group, looking weirder and scarier than he did in “After Earth.” Altogether, this is not an endorsement for the Smiths as great parents, frankly.

Would you let your 12 year old daughter sing this song and act in this video? Let me know. Maybe it’s a different world for the Fresh Prince of Bel Air’s family.