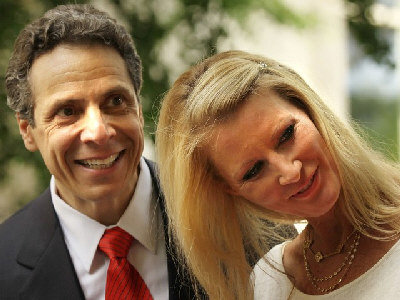 Only in the Hamptons, kids: that’s where you run into New York governor Andrew Cuomo at dinner. He and his lady friend Sandra Lee were having dinner with BMI Music chief Del Bryant and his beautiful wife Carolyn at the famed Nick and Toni’s late last night. Cuomo stopped and chatted with us on his way out, and was in an all around good mood. They may have gone to Audra McDonald’s show at Guild Hall, but I never got to ask them.

Nick and Toni’s, started more than 25 years ago by the late (and great) Jeff Salaway and his wife Toni Ross, just had its first major facelift. The food is still great. And manager Bonnie Munshin was unflappable at the end of what she called “a long week.” The new look takes a few minutes of adjustment. The tables are a little higher and the tablecloths are gone. Most surprisingly, the little outside entrance porch has been turned into a formal structure. Change is hard. We’ll all survive.

Meantime, both Debra Messing and Mariska Hargitay were in the audience on Friday night at Guild Hall for a screening of “Gasland II.” The anti-fracking documentary airs on HBO this coming week. Alec Baldwin hosted the event and emceed the Q&A with the movie’s director who played the banjo at the end of the night. Messing was alone; Hargitay came with actor husband Peter Hermann.

And while the “Gasland II” screening was going on, Mike Myers commanded a table at hot spot Sotta Sopra in Amagansett. We missed him, of course. Drat! Anyway, the wonderful manager, Rose, told us Myers was low key but funny and entertained everyone around him. Sotta Sopra has become a celeb magnet in Amagansett, with neighbor Baldwin a regular customer. Besides good food and vibe, the other attraction that it’s open late. A pizza bar functions until 3am. I’ll keep that in mind when Leon Russell plays the Stephen Talkhouse down the street in a couple of weeks.

I always avoided the play “The Mystery of Irma Vep.” I don’t know why, but it just never seemed like it was for me. The comedy by late Charles Ludlam is one of the most performed plays in the U.S. Last night I finally saw it at the Bay Street Theater in Sag Harbor. It’s very, very funny. Who knew? (Apparently not me.) ‘Irma Vep’ is an anagram for ‘vampire.’ Again, who knew?

In the audience, award winning playwright Terrence McNally. And the great New York actress Joan Copeland, whose brother was the late playwright Arthur Miller. Copeland told me she drove over from Amagansett on her own, and we talked about the incredible traffic at intermission. Later I found out she’s 91 years old! I mean, is this possible? God bless her. She looks and seems about 20 years younger!