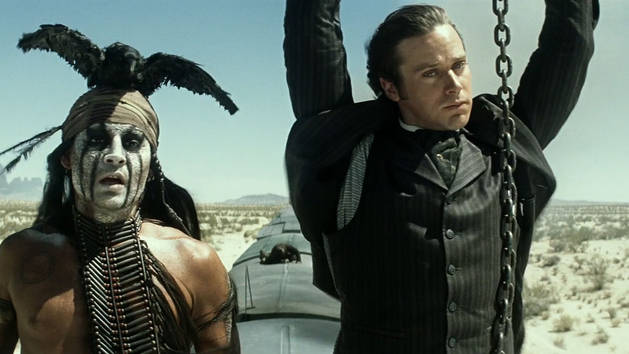 “The Lone Ranger” takes place in the 1860s, sometime after the Gettysburg Address. But late in the movie a band in Texas plays Tchaikovsky’s 1812 Overture, written in 1880. You already knew two hours earlier that Gore Verbinski’s movie starring Johnny Depp as a pirate called Tonto made no sense, but this cinches it. That, and the endless rounds of machine gun fire available to the cowboys and Indians in this interminable film.

“The Long Ranger” is two and a half hours, feels like four, and if you could come in just 15 minutes before it was over, you could experience the best part without missing a thing. That’s when, finally, Armie Hammer rises up on his white steed called Silver, the William Tell overture plays, and The Lone Ranger yells “Hi ho Silver!” Really, it’s a two hour wait to get that point. And still the movie keeps going even when this one almost interesting sequence passes.

It may be key that first the William Tell Overture is played, followed directly by the 1812 Overture. The whole movie is an overture without a symphony. It’s endless, with little to no plot or character development. Just lots and lots of action, lots of explosions, flashbacks, flashbacks within flashbacks.

The whole thing is hung on a gimmick recalling “Night at the Museum.” A boy sees a display of a “Native Warrior.” The boy is dressed like the Lone Ranger. The Warrior is Johnny Depp stuffed and portraying Tonto in his later years. Depp resembles nothing less than Billy Crystal in “The Princess Bride.” If he started speaking with a Yiddish accent, we’d be totally in the other movie riffed on here, “Blazing Saddles.”

This movie cost upwards of $200 million. Disney tried to stop it once, and pulled the plug when they saw the budget ballooning bigger and bigger. That they accepted this budget is amazing. You do see the money on the screen, but it’s squandered on worthless ness. Depp plays Tonto as Keith Richards. (What else is new?) Hammer is good looking and purposely bland as the Lone Ranger because he’s second fiddle to Tonto.

And as with most of these summer blockbusters, it’s all played for jokes. Lacking a story or a plot, the characters have nothing to do but yuck it up. If I hear the expression “Not so much” as a punchline one more time, my head is going to explode.

There’s a vast amount of computer generated activity, too.  A lot of it looks very unreal, almost on purpose (but not quite).

Some nods to the supporting cast which comes and goes: Helena Bonham Carter has no idea why she’s in this movie, or which movie she’s in. She may have wandered over from “Les Miserables” or “Sweeney Todd.” James Badge Dale plays the Lone Ranger’s brother briefly, but is wise enough to exit early. William Fichtner and Stephen Root are largely unrecognizable.

How Disney got into this situation again just two years after “John Carter” is a mystery. Maybe “The Lone Ranger” will open better. But they’re going to have trouble in China– the Asians working on the railroad aren’t treated too well. And Americans may not be so keen seeing Depp as a bumbling American Indian. And American Indians won’t be too keen seeing their elders sort of laughed at. It makes you realize how much work went into “Dances with Wolves” and that was far from perfect.

Thursday morning box office results are going to be interesting. Go see “Frances Ha” this weekend, and “World War Z,” and “20 Feet from Stardom” and “Before Midnight” and even “Star Trek.”