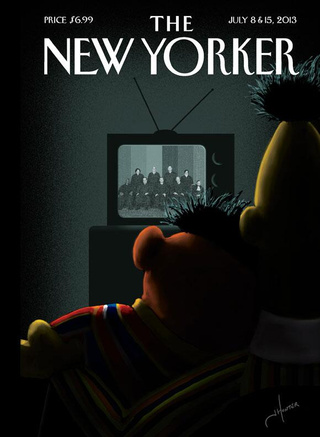 The New Yorker magazine has gone where almost no one has dared to go before. The new cover depicts Bert and Ernie from “Sesame Street” lovingly watching the Supreme Court on TV rule in favor of gay marriage. Bert and Ernie gay? When director Peter Spears went there in his 2002 short film “Ernest and Bertram,” Childrens’ Television Workshop shut him down instantly. I know because I was in the 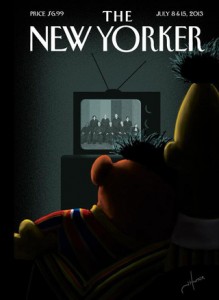 audience at the Eccles Theater at Sundance the one and only time it was shown. I wrote about it a few minutes later. CTW sent a cease and desist letter over copyright violation. I’d be surprised if CTW doesn’t do the same for The New Yorker. Anyway. it turns out “Ernest and Bertram” has been on YouTube all this time. Here it is. And frankly more timely than ever:

Get a free daily update from Showbiz411. Fill out the subscription box at the bottom of the home page!