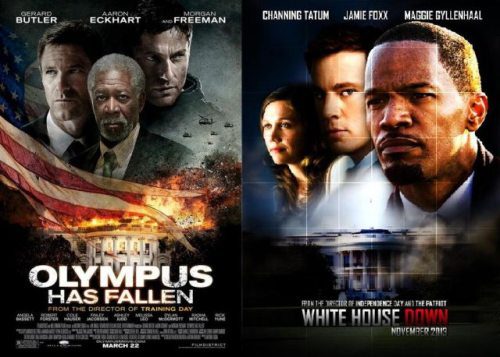 I’m getting a lot of mail, and there’s a lot of discussion about Friday’s movie, “White House Down.” Those who’ve seen it are quick to point out its many similarities to “Olympus Has Fallen,” the Antoine Fuqua thriller that made $98 million domestically this past March for Millennium Films. Here’s one insider’s take on the back story: it turns out that the “Olympus” script went around in January-February 2012. Sony and Millennium each wanted it. Millennium won the rights because they promised to make it right away. And they did. By July they were in production with Gerard Butler starring in it, and Fuqua directing.

Almost simultaneously, they say, Jamie Vanderbilt– who had written scripts for Sony– offered a script about a terrorist takeover of the White House. Sony and Paramount went after it, and Sony won.

“At the time,” a source says, “they probably figured Butler wasn’t a big star, and Fuqua was cold. So they could afford to be the ‘second movie.'”

Millennium moved fast, made the movie, and readied it for March 2013 release. They were way ahead anyway, but things just clicked, a source says.

“Olympus Has Fallen” is pretty much the same movie as “White House Down.” The main difference is in tone. No one can figure out why “WHD” becomes so jokey about half way through the story. It gets very glib. Roland Emmerich seems to lose control. A “21 Jump Street” jivey-ness comes in.

“It could be,” says one observer, “that when they saw how serious but similar Olympus was, they had to do something to change it.”

“Olympus” cost $60 million, and will do $200 mil total internationally. “WHD” is said to have cost $170mil-$200 mil. Abroad, a second movie about blowing up the White House will probably still have power. But domestically: the rule of thumb is, first movie on a subject wins. Sony and Millennium will be paying close attention this Friday.