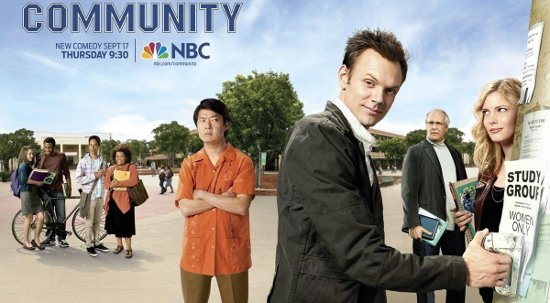 Fans of the cult NBC hit “Community” will be happy. Creator Dan Harmon is coming back. But first he has to make a public mea culpa. And so he has, on his blog today. You can read it all at www.danharmon.com/tumblr.com. I think this is what used to happen in Czarist Russia. Anyway, here are some excerpts:

My apolotweets might not have fit the scale of the crime for some, so I’m following them up with one of my patented apoloblogs.  I want to clarify, I’m apoloblogging in an effort to counteract pain I caused other people.  Not because I think what I have to say is important – this is one of those days when I’m definitely fantasizing about getting less attention.  And less money, and less oxygen, and, like, getting run over by a bus and stuff.  But while I accidentally have your attention, I want to use it to say things I would have and should have said instead of what I did say…

…I went to bed feeling great, woke up and started work on season five of Community with our exciting season five staff.  I took them to lunch, checked my tweets, discovered my name in several headlines next to several bad words, and, as usual, it was then that I started to consider how my words might affect other people if viewed as headlines.  After five seconds of thinking, I realized, as usual, that other people might be hurt, and that I really need to do this whole “saying things and thinking about other people” cycle in a different order at some point.  I think it would make my podcast shorter but I think there’s a lot of listeners that would consider that an upgrade, too.

…Here’s a list of people of whom I failed to think in that moment, and the sincerely owed apologies to them.

…I am first and foremost sorry to Community fans that got paid nothing to stick by Community and get us to a fifth season only to hear the incoming showrunner say some stuff that felt very un-Community.  Even if my goal had been to hurt someone, it would never have been you.  What I said was disrespectful to your love for this show, love that I sometimes erroneously equate with validation of me as a person.  I am unwittingly and unfortunately infamous for the amount I care about your opinion…

Next I want to apologize to the people that did get paid to work on that season, but not enough: the cast and crew.  I get personal value out of being as honest as possible, but, honestly, how honest was what I said?  It was dishonest to imply that something you worked on was as hard to watch as my family being  assaulted.  I was riffing and tried to turn darkness into levity through shock and hyperbole.  I was very much not thinking about anyone but myself while watching that season, which was the crime.  I hope over time you’ll forgive me….

Thirdly, because they got paid more, but still not enough, the season 4 writers.  I’m sorry I pooped on your work.  You had to do something nobody should have to attempt, and you had the option of doing it the lazy way or the sellout way and you clearly did what you did because you were thinking of the fans.  There was some amazing stuff in there.  Funny jokes.  I liked the “Hogan’s Villains” line.  The idea that in Germany, people watch Hogan’s Heroes, but they call it Hogan’s Villains, is seriously so funny I had to rewind it a couple times to finish laughing.  I will apologize to the Germans later.  Season 4 writers:  Thank you and I’m sorry.  As I went on to say in my podcast, the creatives are not the bad guys…I shouldn’t be letting an inhuman system that doesn’t care about humans enough turn humans against humans.  Especially us.  Don’t tell anyone I said this but all writers are better people than all non-writers.  Nobody read that unless you’re a writer.  I broke a code when I judged the work of writers with whom I wasn’t in the same trenches.  I’ll suffer for it because I’ll be looking for a job soon enough and nobody will want to work with Judgy McPsycho Van Crieswhenhetypes.  So I hope my ten seconds of, as the kids say, “butthurt” comedy was worth it to me, and I’ll see you in Hell, where, don’t tell anybody I said this but is where I believe all writers go because we make God jealous.

…Almost lastly, I have to address this “rape joke” concept.  I have to address it because it looks like if I don’t say anything, it could send the wrong message to people with an understandable passion for the subject.  This is a subject that is, and should be, insanely volatile and provocative, because it combines the words “rape” and “joke.”  It puts them right next to each other, it’s like putting a running chainsaw next to a puppy, it’s just not something you can walk past without getting disturbed and invested.  Does anyone think rape is funny?  I hope not.  Do we become more progressive culturally through the mitigation of inappropriate language?  I don’t know, it’s sure worth continued discussion, if you feel strongly one way or the other you should come up on stage at the next Harmontown.  In the mean time, I am deeply sorry to anyone I hurt by using the word “rape” in a comedic context…

…Oh, on the politically correct side, I just remembered something else.  I think when I did my impression of Season 4’s impression of me, I said “durpy durpy dur, I’m Dan Harmon,” which I think I saw someone point out is language used to dehumanize the developmentally disabled, and that’s not cool, I shouldn’t have done that.

…Okay, wow, that was a lot of apologizing.  That was not a short blog post.  Because that’s how sorry I am.  Also I love talking about myself, but, trust me, this has been more pain than pleasure for the guy that made you feel bad.  Now I’m going to get back to conceptualizing with the writers about season 5 and, I hope, achieve a heightened level of actual empathy in the bargain.

(*) Harmontown is currently award-free but I don’t want to have to edit this post later.