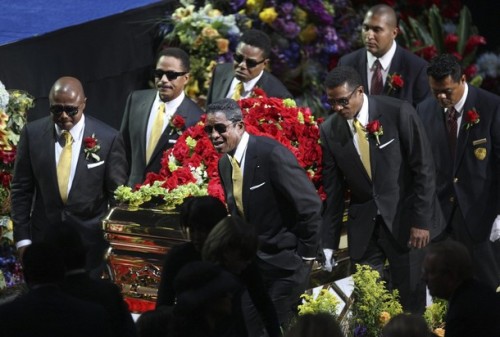 I have to laugh, this is too much. Katherine Jackson and Michael’s kids are suing AEG Live; the trial is proceeding in downtown Los Angeles. Meantime, Michael’s brothers– the Jacksons–including Jermaine– are set to perform on June 30 a few blocks away at the Staples Center. The show, billed as the BET Experience, features R. Kelly, who his own scandals, New Edition with the infamous Bobby Brown.They should change the name from the Unity Tour to the Infamy Tour.

So let me lay this out for you. The Jacksons will do their show in the Staples Center, the place where Michael Jackson was eulogized during a big memorial on July 7, 2009, as well as almost four years to the day of his death — June 25th–and then buried from.

On the stage of the Staples Center friends and family spoke. Michael’s coffin was front and center. AEG produced the memorial in 2009, and now the Jackson brothers  are working for the same promoter while they hope for a jury decision and big money. A Jackson lawyer said today that the boys have no choice. He said AEG is the only promoter in the world. I guess they haven’t heard of Live Nation. Or any of the other concert promoters.

You’d think Jermaine, Tito, Marlon and Jackie would think being at the Staples was too hard or too tacky. That working for AEG might look bad. But no such luck. Where there’s money, there’s a Jackson. And don’t stop til you get enough.