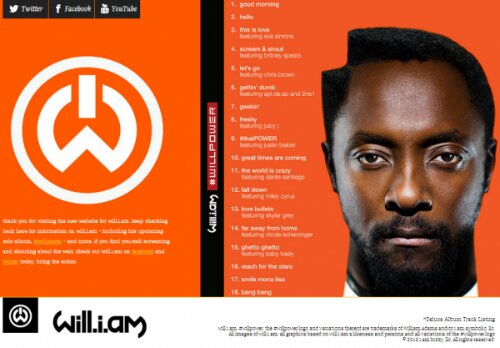 What happened to will.i.am? The leader of the Black Eyed Peas released an all-star album six weeks ago. And it’s an all-out flop. “Willpower” dropped on April 23rd, just ten weeks ago. It’s currently number 96 on Billboard. On Amazon, it ranks at number 555,644– that’s right, you didn’t read that wrong. The sales are a total write off, an unmitigated disaster.

What makes “Willpower” — with a hashtag– all the more perplexing is that it’s filled with top of the pops guest stars. Britney Spears, Justin Bieber, Miley Cyrus– certainly marketable names among disposable stars– are featured on singles. The Britney single, “Scream and Shout,” made it to number 1.

But it turns out that the singles from the album sold over 4 million copies. Soundscan tells me Britney’s single moved 3 million units. And over a million more went to other individual tracks.

But the Bieber single, “ThatPower,” only got to number 17. And now, that’s it. I’m told that will.i.am, real name Will Adams, –who I think wrote a great album of pop hits–thinks he can revive “Willpower” by making a new video with Miley Cyrus for her song, “Fall Down.” The concept is supposed to be a take off on Quentin Tarantino’s “Django Unchained” in which Miley– now making a big career jump with a new look and her own new hit–would play a plantation owner’s daughter.

But the 55,000 copies is something of a shock, and a head scratcher. It certainly shows how difficult the music business is these days. My guess is that Will learned a lesson as he tried to make a Quincy Jones-type album with lots of guests. His audience–used to Fergie singing lead– didn’t want three white teenyboppers. If he re-records those songs with serious singers, of appropriate ages, and a little multicultural, he could have a hit.