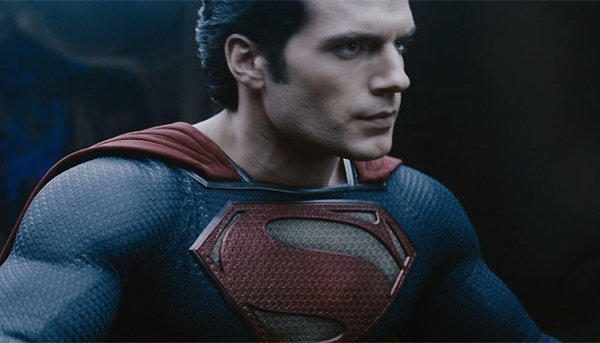 Someone– Warner Bros., I guess– describes “Man of Steel” like this on the imdb: “A young journalist is forced to confront his secret extraterrestrial heritage when Earth is invaded by members of his race.” Well, this is a stretch since the latest iteration of Clark Kent is not a journalist of any kind in “Man of Steel.” Indeed, from the looks of things, strapping young Clark is in his early 30s and has been on a fishing trawler– or something. He’s quite old to have done nothing with his life or the superpowers he presumably has discovered in his early teens. But “Man of Steel” doesn’t make a lot of sense, so don’t dally here.

Zack Snyder is a stylish director, and his version of the “Superman” saga has plenty of eye candy whether it’s people or things. Clark makes his first appearance stripped to the waist, chiseled and bulked up very Hugh Jackman “Wolverine”-like at the start of the film. Luckily, British actor Henry Cavill is an old fashioned matinee idol, and he can act. So pretty much whatever will happen, he is watchable. When he finally runs across Lois Lane, an established star reporter, you see they have chemistry. Amy Adams can grab just about any role by the tail and toss it around. She’s perky and smart, and a good choice for Lois.

At first the screenplay seems promising. Since we’ve seen “Superman” dozens of times, we know the story. This one is a tad different. Lois works for Perry White (Laurence Fishburne) at the Daily Planet. When he won’t publish her story about space ships and aliens she turns it over to a Drudge like blogger whose name is “Wordbern”– for Woodward and Bernstein. (It’s a joke.)

Meanwhile, Clark is targeted by General Zod of Krypton, the enemy of Clark’s late real father, Jor El. Russell Crowe is a much more active and athletic Jor El than Marlon Brando, that’s for sure. He’s an action hero on Krypton! And Krypton is no longer a place of icicles and magic. It’s a CGI fortress with loads of sci fi stuff flying around. (I’d love to see that budget.) And Michael Shannon looks like he may be a worthy villain.

But trouble looms: there’s a great set up, a decent middle act as Clark and Lois meet, and then– no third act. The entire last third of the movie is mind numbing explosions. Don’t worry about spoilers because the story gives way to chaos. There’s not much humor or wit. There’s no sense of awe or wonder (I think of Christopher Reeve flying Margot Kidder around at night). And what had promised to be something interesting splatters.

“Man of Steel” cost around $250 million to make. A lot of it annoyed me, especially when office towers are constantly blown up, people fall of out of them, papers and personal belongings go flying out the windows. There’s no thought of 9-11, or maybe there is. Maybe no one cares anymore. But I winced a lot at the mayhem. And it’s not like Superman is saving anyone.  Instead of a story, just more buildings are blown up. Metropolis is wrecked. You know in the old days, Superman flew around and stopped catastrophes– he held together falling bridges, or eye-soldered collapsing buildings. Now he causes the problems in pursuit of Zod, laying waste everywhere and not caring much. I didn’t him saving people so much in this film as obliterating them.

Oh, well. Maybe the fanboys will love this Superman. But the charm of the Donner films is far, far away. What Snyder has going for him is a strong cast. I don’t know how far that will go to help the film past a first weekend. The studio can cross its fingers and hope for big international numbers.