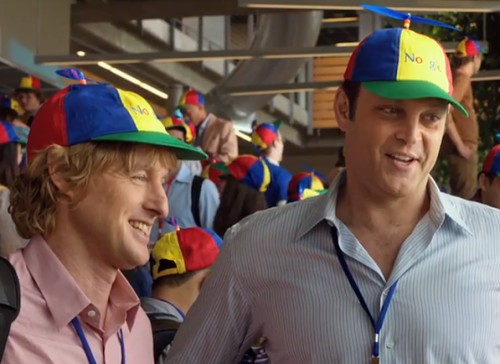 The movie going audience didn’t want to see “Wedding Crashers II” set on the Google campus. Last night’s box office shows that “The Internship” with Vince Vaughn and Owen Wilson is a huge misfire. The poorly reviewed comedy finished second, taking in $6.5 million. The two big stars weren’t a draw. Neither was the premise of two older guys working at Google.

Even though the movie was shot on the Google campus, people weren’t as interested as you might have thought. And there was the topical news hook of government internet spying this week. Still, it didn’t work. Maybe they shouldn’t have cut Eric Schmidt’s cameo.

The big news is that the #1 movie last night was a horror thriller from Universal called “The Purge.” It is not about vomiting or extreme dieting.

The director, James DeMonaco, has only one other movie credit and some TV credits. Ethan Hawke and Lena Heady star. “The Purge” caused an urge and took in over $16.7 million last night. And get this: it only cost between $3 and $5 million to make! Among the producers is our old pal Jason Blum, who also makes the “Paranormal Activity” films. He knows how to make these very low budget, high grossing phenoms. “The Purge” has also made well over $2 million in the United Kingdom.

Falling to sixth place last night was “After Earth.” But heading toward the $200 mil mark domestically is the fun and well made “Star Trek: Into Darkness.”