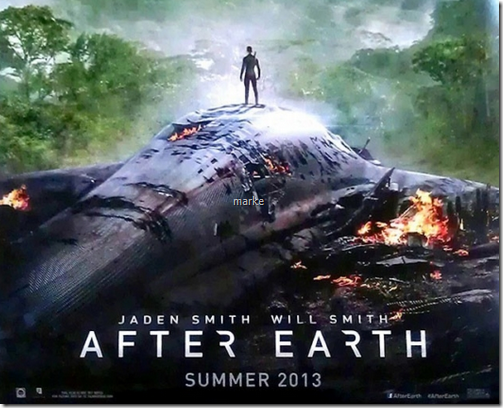 “After Earth” has turned into a disaster movie. On Friday night the Will Smith sci fi movie finished not first or second but in third place. The $200 million movie featuring Smith’s 14 year old son Jaden took in less than $10 million last night. That means Sony-Columbia is looking at less than $30 million for the weekend.

The reviews are terrible and word of mouth can’t be much better. Sony will survive this easily– they have plenty more hits coming– but Smith is becoming a little like Tom Cruise in that he’s not able to open a non-franchise film. In this case, it’s worse because he made his son the focus of the film.

At the premiere the other night, people were trying to leave the theater simply because the movie is do damn boring and preachy– and this is aside from the Scientology references.

“After Earth” finished behind “Fast and Furious 6” and “Now You See Me” with $9.8 million.

Opening and sustaining a box office hit this summer is not easy. Warner Bros. has struggled with “The Hangover Part 3” which is underperforming with $77 million so far. It’s doing about 50% of the business of its predecessor.

Meantime this reporter is in London tonight preparing for the premiere tomorrow of Marc Forster’s “World War Z.” Paramount Pictures actually flew me here today so I can tell you all about the big opening and a concert by the group Muse–their music is all over the soundtrack.”WWZ” has been plagued by problems and also cost well over $200 million. But guests at a private screening in New York about ten days ago seemed to like it– surprise! We’ll see on Sunday.