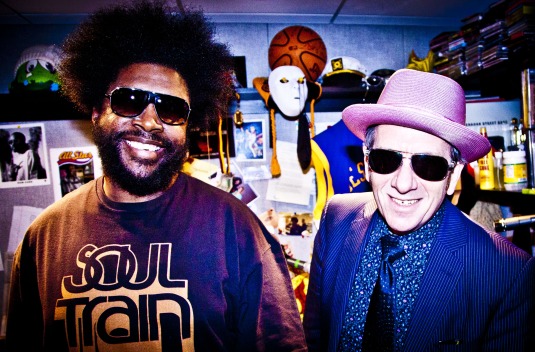 News from the pop-rock world: Elvis Costello and the Roots are indeed releasing a secret album they made together. “Wise Up Ghost” comes from Blue Note Records on September 17th. Expect a whole week of Elvis, I hope, with the Roots on “Jimmy Fallon.” Elvis produced the album with Questlove from the Roots.

“Most of the sessions took place in secret at Feliz Habitat Studios in the dead of night, while others were in plain sight at Costello’s Hookery Crookery Studios. Elvis described the record as “the shortest distance between here and there” and containing “both rhythm and what is read”. Ahmir says, “It’s a moody, brooding affair, cathartic rhythms and dissonant lullabies. I went stark and dark on the music, Elvis went HAM on some ole Ezra Pound shit.”

…Ringo Starr is releasing an e-book called “Photograph” on June 10th. It costs $9.99. A physical edition from Genesis Publishing is due at Christmas, which will cost considerably more. “Photograph” will be similar to Ringo’s “Postcards from the Boys,” one of my prized possessions. The e-book has according to its release:

“The multi-touch edition allows readers to pick up, play with and zoom in on Ringo’s photographs as they scroll through his memories. Photograph features 69 audio stories and 11 exclusive videos, with music, animation and new interviews from Ringo Starr. Ringo’s first multimedia edition is a must-have for fans of The Beatles and anyone passionate about modern music.”