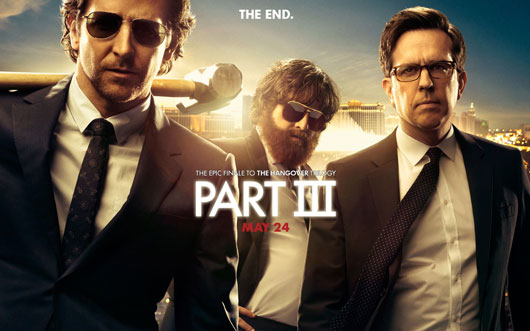 Let’s just say there will not be a fourth installment of “The Hangover.” This weekend, the third and final installment of this one note joke rang in a grand total of $54 million– that’s starting back on Thursday with four days through Sunday. The last episode, “Hangover II,” had an opening weekend of $86 million. The fans are gone. They can not only smell a rat, they can read about it: “Hangover III” scored a miserable 21% on rottentomatoes.com. Even the junketeers and bloggers who are courted and fed to get nice notices didn’t like it.

I never saw this new movie so I don’t know if it ended with everyone dying, or whatever. But seriously, there will be no fourth episode. Bradley Cooper is now a movie star, and an Oscar nominee. He’s done. The others will go into other comedies, and probably back to TV in some smart shows. In the fall, Michael Douglas, Kevin Kline and Robert DeNiro will headline “Last Vegas,” the senior version of “Hangover,” and that will bring the whole concept to an end. (Women got “Bridesmaids.”)

There’s always room for vomiting, trashed rooms, blackout sex, and miscellaneous animals wandering around, so you know someone will come up with a new twist on all this in three years. “The Hangover” is just “Animal House” with a bigger budget. I look forward to the next iteration. But for now, say goodbye to this gang. Their core audience has, too.