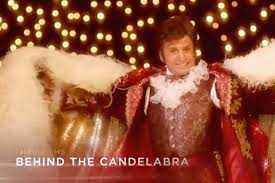 Michael Douglas and Matt Damon, not to mention Rob Lowe, are sensational in Behind the Candelabra. Steven Soderbergh’s terrific film premieres in Cannes tonight and plays on HBO on Sunday night. It’s so good it should be a theatrical release. Hilarious to see Douglas, a notorious ladies man, sexing it up with equally straight Damon. But they are just great. Damon plays Scott Thorson, Liberace’s lover, Douglas is the flamboyant pianist who hid his gay life and died of AIDS. The sets and costumes are sumptuous, make up is wondrous. Rob Lowe is a scene stealer as the mens’ plastic surgeon. Hollywood legend Debbie Reynolds scores as Liberace’s mother. Jerry Weintraub produced, Richard LaGravenese wrote the script. Everyone will get Emmy awards, trust me.