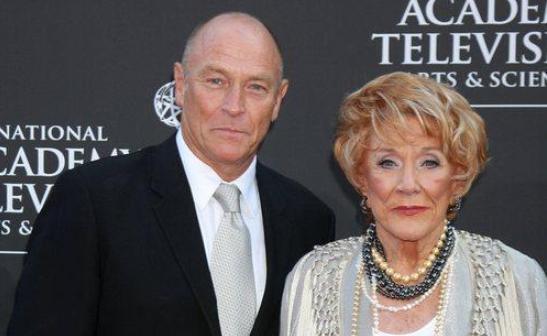 Very sad news: Jeanne Cooper, the Emmy winning star of “The Young and the Restless” since it began in 1973, is dying. Her son, actor Corbin Bernsen, posted news about 3am Eastern that his mom was in her final stages. His post follows. Cooper, 84, had always seemed indomitable. But she’s had a lot of health issues in the last year, and didn’t look well in her recent appearances. She will be sorely missed and really mourned by her fans (not to mention her devoted family). If you don’t watch the show or know anything about it, suffice to say that Cooper’s character, Katherine Chancellor, drove the main story of the show from day 1 until now. Every time the writers ran out of new ideas, they’d return to the feud between Katherine and Jill Abbott (the great Jess Walton), and the show would revive itself. Katherine even “died” a couple of years ago, and there was a big funeral. Of course, she returned. But now her real on camera funeral will be quite a moment in TV history.

Please know that I’m not saying my mother’s life has ended, it hasn’t, but no matter how you slice it, she is in the final stages, whether it lasts an hour, day, month or years. I had to say “goodbye” to her tonight “just in case” as I’m traveling tomorrow to Vancouver for Psych. I have prayed for her recovery – some sort of recovery – and earlier this week got a hint of it. But then I saw her tonight, connected once again to so many tubes and machines “healing her.” And there is a difference – yes they are keeping her alive just as antibiotics would do for an infection – but they are more or less there to help in her short term recovery. Is she in a natural [descent] toward the end? Not sure. Is there a future? Not sure? And if so, what kind of future? Even less sure.

So I said my goodbyes tonight, had a good release of emotion and then left the room, more uncertain thanI have ever been about so many things. I wish I could be more positive for you tonight, but I reserve the right in this space to be plain, simple and honest. I know it’s only in that realm that I will find the answers I’m looking for right now. I love you mom. I’m giving it up to you and God to find peace in this world or the next.