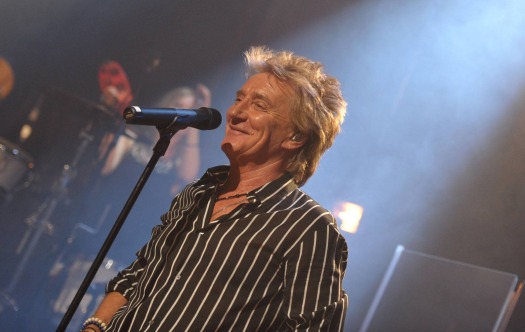 The one hour set was to launch his new album, “Time,” releasing on May 7th with all songs written and produced by Rod. After several volumes of standards, this one’s a rocker, a return to form.

Rod, in his skintight black jeans, black and white striped shirt, his bracelets and necklaces and his black and white creeper shoes, proves he is more charming and charismatic than ever.  And endearingly klutzy. During the first song, when he turned around for a drink of water, Stewart inadvertently knocked over the microphone with his elbow.  That caught him by real surprise; he was taken aback for a second. He looked sheepishly at the crowd at first and then started to laugh.  Seems like Rod is not used to a small stage, he routinely sells out big arenas, one of his longtime entourage told me that, “It’s the first time I’ve ever seen him do that.  He’s used to running around the stage.”

Stewart started the evening amiably chatting with the crowd. “Welcome to The Troubadour. It’s the first time I’ve played here. I’m playing ten songs, six new ones. So when you hear the new ones, please applaud loudly.”  When Rod saw some phones going off, he quipped as only Rod can, “I thought there weren’t supposed to be fucking phones here! Okay. well enjoy yourself and make some noise. You know the songs. ”

He started with “Can’t Stop Me Now.”  Rod didn’t seem to mind that his daughter Kimberly was taking pictures from the VIP section-he went over and waved to her and her brother Sean, who were with Richard Perry.  Rod’s wife, Penny Lancaster, was standing with the regular crowd, next to the camera, singing and helping Rod along. He then sang “Forever Young,” to the delight of the crowd.  He explained, “If you’re wondering why I’m here, this will be played to some 40 or more countries. The Troubadour instead of the Staples Center, this is more fun, isn’t it?”

His third song was, ‘It’s Over,’ a song Rod said, “which is about divorce, which I know a little about.  It seems to be a plague in this society, this one is a serious song.” Rod warbled his classic, “Rhythm Of My Heart,” which he followed with “Finest Woman,”  which he dedicated to Penny, “my gorgeous wife.”   ‘You Wear it Well,’ followed that, and then “She Makes Me Happy.”

Stewart never stopped moving, working every inch of that tiny stage.  He sang a heartfelt version of Van Morrison’s  “Have I Told You Lately,” followed by a truly beautiful new song, ‘Brighton Beach.’  Rod explained, “I wrote this song when 17 or 18, and I thought I was in love with a girl I met there.  It’s a reflection of the 60’s.  I’m sure none of you were there, I was though!”  He went on to reminisce about his father. “When you get into the music business, you need your family behind you and a hell of a lot of commitment.  I had both.” The jaunty and racy ‘Sexual Religion’ ended the set.  His encore was the song he started with, “Can’t Stop Me Now.” And that seems to be the case.

PS After the performance, Rod took his family next door to the fabled but cramped Dan Tanas’s, where surprised diners Tweeted in ecstasy between bites of spaghetti marinara and linguini with clam sauce.