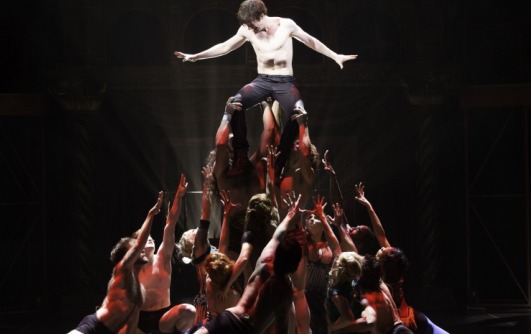 “Pippin” was not such a great show back in 1972. Ben Vereen was terrific and the music and dance were always outstanding. But the show never came together. The story was weak. Forty one years later, “Pippin” is back. Ben Vereen was front and center last night to watch Patina Miller take his place as the Leading Player, the circus barker under the big tent. Diane Paulus has turned “Pippin” into the Big Apple Circus mixed with Cirque du Solei and finished with The Box, the raunchy burlesque club downtown (her husband is an owner). And it works! “Pippin” is poppin’. It’s better than ever now that it’s been given a reason to exist.

And stars are born. Of course, the best star is already a Tony winner. Andrea Martin, famous for Second City TV, won a statue for “Young Frankenstein.” She has a habit of stealing shows. In “Pippin” she plays the grandmother. She stopped the show last night when, at age 66, she performs Cirque du Soleil like acrobatics with a net or a wire, looking fit as a fiddle in a skimpy outfit. And she sings upside down. The audience rises en masse for a real standing ovation when she’s finished. It may be the performance of the season.

The other new stars include Matthew James Thomas, who plays Pippin. I saw him once as an understudy for Peter Parker in “Spider Man.” It was clear he’d be a star. As Pippin, he’s a rock star. Not only he is a proficient singer, but he also emerges as quite the supple acrobat and athlete. I asked him after the show if he’d ever done of the tricks required for this role–walking up poles, crossing balance beams at heights, backflipping across the stage into song. “No,” he replied. “None of it.” He only perfected the backflip three weeks ago, he said. And just wait: Duncan Sheik has signed on to produce Thomas’s first album this summer. And he’s being managed by the great Ron Shapiro.

More stars: Patina Miller is sensational as Vereen’s successor. Worked out to remind us of Linda Hamilton in “Terminator,” Miller is a ferocious presence on stage. She’s a clear choice for Best Actress in a Musical this season, totally in command vocally and physically. She’s mesmerizing.

There’s also the Stephen Schwartz music– “Corner of the Sky,” “No Time at All,” and the opener “Magic to Do”– are classics. You listen to “Corner of the Sky” wonder why no one can write hit songs for musicals anymore. And the Bob Fosse dancing–this is where Michael Jackson absorbed 90% of his steps (the rest came from James Brown). And you see “Chicago” here, too, with its sinewy steps, in the shadows.

So “Pippin,” with Outer Critics nominations, heads to the Tony noms next. Best Musical Revival, Best Director *Musical, plus acting nods for Thomas, Miller, Martin, and Charlotte D’Amboise as Pippin’s knockout of a mother and Terrence Mann as the father he just doesn’t agree with.