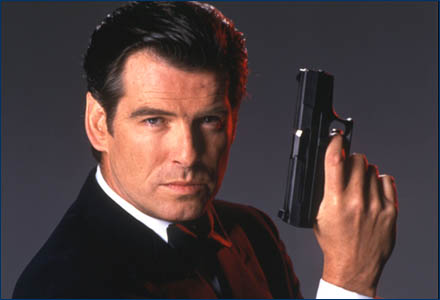 “No one invited me.” Pierce Brosnan is setting the record straight about this year’s Oscars the James Bond tribute. He told me this at the junket at the Waldorf Astoria Monday afternoon for his new movie “Love is All You Need.” (Later that evening he attended the Barbra Streisand tribute at Lincoln Center.)

“I was at the market, which I go to every Sunday and one of these chappies from TMZ said, ‘So Pierce, are you going to be there?’ I said, ‘Well I’m not going to be there. No one invited me.’ I didn’t even say no one invited me. I said, ‘I don’t think I’ll be there. It’s another man’s job.’ It got blown into something else. Anyway it became I snubbed them. I didn’t. I didn’t’ get invited.”

Pierce Brosnan, who will turn 60 in May, is still as charming and handsome as he was when he played 007.

The women journalists – as well as a few of the men – were smitten by the Irishmen’s charm and warmth. He was passionate about talking about his new film, sang a little – off key – when told the movie is sort of “Mamma Mia” without the music, and at the end of the roundtable heartily embraced a woman who told him her husband had recently died of a heart attack.

“Love is All You Need,” is a romance directed by Danish filmmaker Susanne Bier, whose last film in 2010, “In a Better World,” received an Academy Award for best foreign film. Brosnan plays a work obsessed Englishman and lacking father, a widower living in Denmark, who falls for Ida (Trine Dyrholm), a Danish hairdresser, who is battling breast cancer and who has just been dumped by her husband.

She and Brosnan’s character meet at the airport-parking garage where she accidentally rams into his car; coincidentally they are both off to the Amalfi Coast to attend the wedding of his son and her daughter. Underneath her wig Ida is completely bald. It was originally called “The Baldheaded Dresser” Brosnan said, “and remained that in Denmark, which is so blunt, truthful, honest, up front, but I don’t think it would fly here.”

Another thing that would be lost in translation if made here is the story, which is very European in sensibility. Could this movie have been made here, Brosnan was asked? “The studio would have just hammered this to death. Executives would have gone in there with their little kind of moral values and cut the balls out if.” He added, “Their shortcomings are evident in the produce that they present to the great American public in the guise of romantic comedies, which are rather thin and they don’t have any real bite or humanity or substance.”

Brosnan plays a man still shut down emotionally after his wife’s unexpected death years earlier. There are parallels that will be made between his life and the role he plays. “I do remember someone living through an illness a long time ago, who had the greatest of grace and dignity, and the cup was always half full,” Brosnan said, referring to his late wife, Cassandra Harris, who died of ovarian cancer in 1991.

So what made him believe in love again?

“The widower’s world is not so groovy,” he said dryly, “when you lose someone who you really love, and then you have to go out and date again and you bump into the furniture. As a guy you go out and you trip the light fantastic and you come home and you just go, ‘Wow! What was that about?”

Yes, I know, who talks like that and who buys Pierce Brosnan is a klutz? But it’s what he said.

He’s been with his wife for 19 year,s he said. “We just had lunch together and we’re celebrating this movie,” Brosnan said. “She allows me to go off and do what I do. She calls it legal cheating.”

He has a trifecta of films coming out. The next one is with Emma Thompson, a romantic comedy called “Love Punch.” He and the late night television host Craig Ferguson are producing a thriller called “Last Man Out,” set in Belfast. And he’s next off to make a spy thriller in Serbia for his production company Irish Dreamtimes called “November Man,” directed by Roger Donaldson. “I play a man who’s been out in the cold for some time,” he laughed. “And then there’s the younger guy. There’s always the younger guy.”