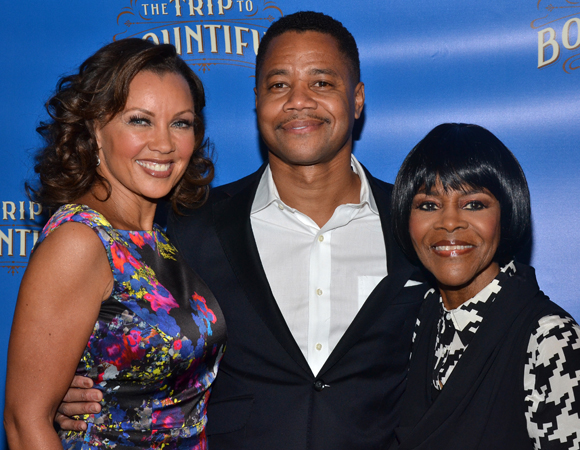 There are a lot of good actors onstage at the Sondheim Theater in the revival of Horton Foote’s “Trip to Bountiful.” Cuba Gooding Jr., Vanessa Williams, Tom Wopat, Condola Rashad– all excellent. But let’s face it, the story is about Cicely Tyson. She’s either 79 (likely) or 88 (not possible) and hasn’t been on Broadway in thirty years.

She picks up the role of Carrie Watts– for which Geraldine Page won an Oscar in the 1980s, and Lois Smith got accolades seven years ago on Broadway– and marches away with it like it was nothing. Tyson is on stage in almost every scene for two hours. At one point she’s supposed to be sleeping on a bench in a train station. She never shows fatigue. Her stamina and enthusiasm are unceasing.

How does she do it? At the after party last night at the “Copacabana” (I used quotes because the real Copa is long gone; this is just a name on the old China Club), Tyson said: “If you drove a Bentley what would you put in it? I know everything that goes inside me. And it’s the best. I’ve been a vegetarian for years.” Why did she come back to Broadway? “One word,” she said. “Bountiful.”

It does like Foote wrote the part for her. Of course, he didn’t. Lillian Gish played the role in 1953. Lois Smith played Carrie in 2005. Page did the movie. There are countless productions over the years all over the country no doubt. But this version may quickly become the template under the direction of Michael Wilson.

“Bountiful” is a slow starter, an old fashioned play. But give it a minute to warm up and you find you’re totally drawn in to Carrie Watt’s quest to see her childhood home one more time. And Tyson’s scenes with Condola Rashad, playing a young woman she meets on the bus, are just outstanding. Condola is the daughter of Phylicia Rashad and Ahmad Rashad. She won a Tony nomination last year for “Stick Fly.” One more great performance and she will be ready for leads. Kudos to Vanessa Williams and Cuba Gooding Jr., too.

Tyson and the cast are in for a 14 week run. They agreed to do 20 weeks if needed. This is an historic production. No one will ever want to say they missed Cicely Tyson. And last night, the celebs include former Mayor David Dinkins, opera great Jessye Norman, Al Roker and Deborah Roberts, Suzanne dePasse, Deborah Cox, and Tony winner Steve Kazee from “Once.”

By the way, Knicks star center Tyson Chandler and his wife Kimberly signed on yesterday as added producers on the show. I met Tyson. He’s like 7′-2″, okay? He towered over the other producers. He gets an aisle seat.