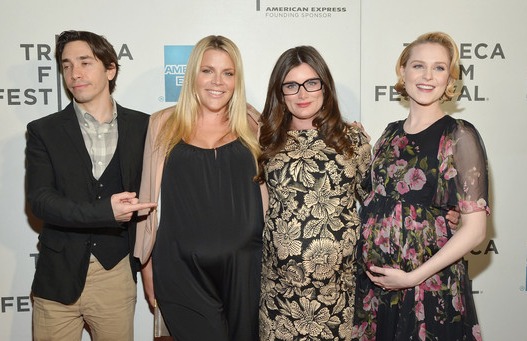 Actor Justin Long, his co-writing brother and a friend, plus director Kat Coiro made a plea last night from the stage of the Tribeca Film Festival. “Joni Mitchell, please return our calls!” The reason is they named their very charming romantic comedy “A Case of You” after a Mitchell song, and they want to use it in the movie. They’ve tried to contact Mitchell, but to no avail. “We’d like to use it all the way through, in different versions,” said Coiro.

If Mitchell saw the movie, I know she’d say yes. Long, his brother Christian and Keir O’Donnell have fashioned a taut, tart, smart comedy that stars Justin and Evan Rachel Wood in their own sort of “Annie Hall.” The two main players are extremely endearing, but so are the supporting cast including Peter Dinklage (in a hilarious turn), Busy Phillips, and cameos from Brendan Frazier, Sienna Miller, Sam Rockwell, and Vince Vaughn. Among the guests last night– Michelle Williams, her BFF.

“A Case of You,” produced by Holly Wiersma, should be an easy sell to a distributor. (Fox Searchlight? hello?) It’s the perfect date night movie, a lot like “Celeste and Jesse Forever” but maybe a little zippier. Long is a long-waited young male lead along the lines of Paul Rudd. Wood is luminous and easy to fall in love with. You can see why Long’s character goes into near-stalker mode to get to know her.

And instead of turning small points into big ones, the screenplay economically keeps moving, concentrating instead on character instead of plot. This works because frankly, you know these stories. So Long et al deliver us a lot of likable, identifiable people.  A great debut for Long and friends, and director Kat Coiro pulls it off.

Plus–and this is a weird pr twist for the movie– Coiro, Phillips, and Wood are all pregnant in real life, and pretty much on track to deliver around the same time in mid to late June. “There was something in the water on that film,” Wood joked.