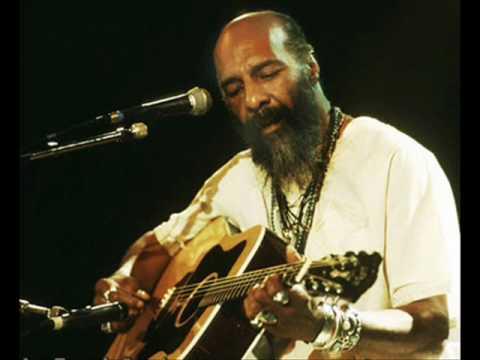 Richie Havens WAS Woodstock. He died this afternoon ate age 72 apparently from a sudden heart attack. What a shame. One of the great performers, and an important figure in the history of folk music. His version of “Here Comes the Sun” stands the test of time and then some. He was an enormous influence musically and politically. He was not a pop star, which is probably hard to explain. But after opening Woodstock in the summer of 1969, he became an important force regardless. Last month, on March 20th, this announcement was posted to his Facebook page:

As many of you already know, Richie had kidney surgery a year and a half ago. Though he did return to the stage after that for numerous concerts, he truly never regained the physical strength required to put on the kind of shows for which he’s always been known, and coupled with ongoing health concerns, the traveling and performing have simply become too hard on him for him to be able to continue. After 45 years of non-stop touring, this is a sad and unexpected reality.

From Woodstock to The Isle of Wight to Glastonbury to the Fillmore Auditorium to Royal Albert Hall to Carnegie Hall, Richie has played the most legendary music festivals that ever were, and most of the world’s greatest concert venues. But even when performing in a Greenwich Village coffeehouse or a small club or regional theater, he’s always been eternally grateful that people in any number turned up each time to hear him sing. More than anything, he feels incredibly blessed to have met so many of you along the way.