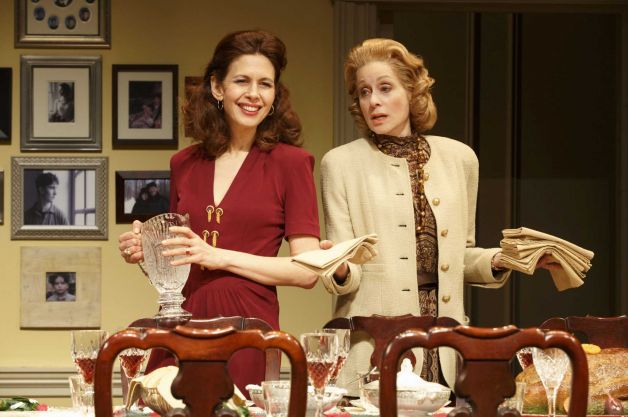 Playwright Richard Greenberg had an unenviable problem yesterday. Just as his excellent new play “The Assembled Parties” was about to debut, he had to change a bit of it because of the tragedies in Boston. Sources tell me that originally, one character unseen but talked about is said to have the ability to “build a bomb from scratch.” That had to be changed to “make fire with her own hands.” And a reference to Boston was changed to Cambridge at the same time, so no one would be offended.

These are minor changes to a play that got raves last night as it opened under the direction of Lynne Meadow at Manhattan Theatre Club. I dare say that the play, the director and the cast– starting Judith Light, Jessica Hecht and Jeremy Shamos–are in line for lots of awards. “The Assembled Parties” is disarming, moving, funny and sad. But mostly, it’s so stunning its way that it may throw the Best Play contest at the Tonys into its own race– with Nora Ephron’s “Lucky Guy” and Christopher Durang’s “Vanya Sonia Masha and Spike” getting an expected nudge.

There was an unexpected guest in the audience, too: Valerie Harper came from Los Angeles with husband Tony Cacciotti. Rarely has there been a more welcome sighting of a celebrity. Valerie looks incredibly well despite her health situation; to be honest, Tony looked tired. Valerie said, “We haven’t been getting back to people because everyone is offering a cure.” Her resilience and determination are amazing.

“Assembled Parties” is a story of survival too. It spans 20 years in the life of a Jewish family in New York. The people on stage are not unlike those in the audience. But Greenberg peels back layers to find new stories, emotions, and relationships. Light and Hecht are sisters-in-law whose lives seem very set and positive, and full of hope in 1981. By 2001, things have changed considerably, and we see an entire arc played out. Sham0s–who in real life is the grandson of the late game show TV king Mark Goodson–plays a loyal family friend with incredible empathy.

So– a nice surprise, on all accounts. Light and Hecht are really superb, and they make “Assembled Parties” much more than it seems at the outset. We’ll see them all in June at the Tonys.