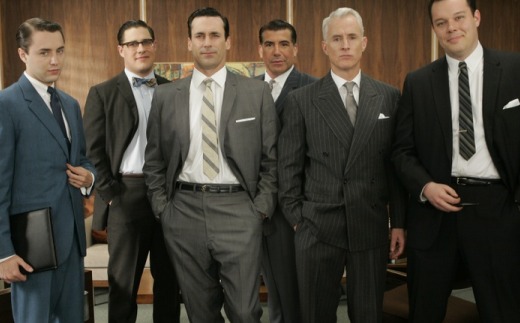 Somehow we have jumped from the last week of 1967 to the first week of May 1968 in the second episode of “Mad Men,” Season 6 called “The Collaborators.” How do we know? Pete and his neighbors are talking about the musical “Hair,” which opened on April 29, 1968. Hair is a good place to start because Pete’s is terrible, Harry’s is worse, although Don and Roger have not changed one bit into trendsetters. If anything, they have remained firmly ensconced in 1960.

Vietnam is playing in the background, and the USS Pueblo incident is going on with North Korea. Oh wait: that’s late January. So now I have no idea if it’s January or May. Hmmm. [I do think it’s January, and no one bothered to check about “Hair.” It completed its off Broadway run the last week of January 1968 and reopened on Broadway in March. By the way, did you know the Pueblo has been rusting in North Korea all this time?]

Anyway: Megan’s had a miscarriage and hasn’t told Don, but tells Sylvia, who’s having an affair with Don. It’s hard to say if Megan is living in a soap opera or working on one. Pete lures a neighbor’s wife to New York for sex, she tells her husband, who throws her out after beating her. The wife tells Pete’s wife, Trudy, which pretty much craters their marriage.

Advertising? Peggy learns a secret about former client Heinz Ketchup, spills it to her new boss and they go after the account. At Sterling Cooper, the Heinz beans guy has told Don et al that there’s competition with his company. And the Jaguar guy who slept with Joan his back, and he’s cheating on his British counterparts.

Meantime, we find out that young Don and his pregnant mother stayed in a brothel, where she had sex with the owner. While she was pregnant. And Don watched through a key hole.

These are all “The Collaborators.” And by the end of the episode, the weight of living a lie — or many– pushes Don down onto the mat outside his apartment, too enervated to open the door and walk in. An episode of no great consequence except that everyone in it is lying, or cheating.