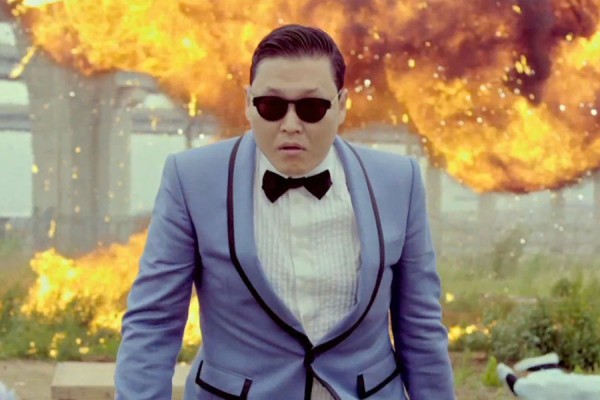 UPDATE WEDNESDAY: 111 million views “Gentleman” and I have no freaking idea why.

North Korea is threatening nuclear war and this may be why: Psy, the Elvis Presley-Michael Jackson of South Korea, just keeps getting more and more crazy popular. His new video, “Gentleman,” was posted to YouTube on Saturday. In 24 hours, give or take the international timeline, the video has garnered almost 11 million views. On Saturday in Seoul, Psy gave a stadium concert for 50,000 insane fans and live streamed it to YouTube where an undetermined gazillion more fans watched him around the world. You can see it here.

I have no idea what he’s saying, although Psy does speak perfect English. The concert was in Korean, however. Missiles are being aimed right now by Kim Jong Un since both “Gentleman” and “Gangnam Style” are incredibly annoying, mean nothing, and signify the end of the world. Psy is being managed in the US by Scooter Braun, the man who’s given us Justin Bieber and “Call Me Maybe.” (He is not on the Kennedy Center Honors list this year.)

Psy, by the way, is 35 years old and the son of a successful Korean businessman. His real name is Park Jae-Sang.  The DI Corporation, which makes semi-conductors, is a $100 million business according to reports.