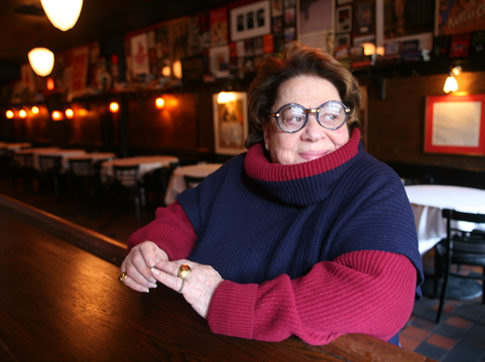 Today–Sunday, April 14, 2013– approximately would have been the 50th anniversary of Elaine’s. Pete Khoury reminded me of this when I ran into him on Friday night at Bar Centrale, owned by Elaine’s old pal Joe Allen. Bar Centrale is above Joe Allen’s on West 46th St. and it’s become in the last couple of years, a kind of Elaine’s, a smaller version, but a place where you can go late and know you’re going to run into some interesting people before the night ends.

But basically, since Elaine died on December 3, 2010 and the restaurant was shuttered on May 26, 2011, there has been no place to go at all. The old crowd drifts around. Neary’s has been very nice to anyone who stops in, and at Elio’s– run by a former Elaine’s waiter–they know we are the survivors. But Elaine would be so angry that we were there, or anywhere. “Where ya been?” is how 90% of all conversations began, even if it was just a week or a few days, or Tuesday since last Thursday. “Whaddaya mean? I was just here, Elaine,” I would plead.

Five years ago, on the Tuesday before the Sunday, Elaine said, “It’s the 45th anniversary this Sunday.” Pete Khoury and I looked at her a little surprised. She said, “Don’t do anything.” She was afraid some people wouldn’t find out in time, miss whatever event we planned, and be mad. She was right, because that’s what happened with a couple of friends.

But the place was jammed on that Sunday. Woody Allen came with his wife Soon Yi and one of their little girls. He arrived punctually at the stroke of eight, and stayed for quite a while. Elaine was beaming. We dressed the place up with balloons. Every table was taken. The old old timers met the new old timers. There were lots of toasts and Father Pete Colapietro sang. Jessica Burstein took pictures. We didn’t quite get it that the end was near. I know we thought 50 would be easy after that. So don’t take anything for granted.

You know, we do miss having a place to go at 11 o’clock at night. In the new Broadway play “Lucky Guy” there’s a scene set in Elaine’s, one with which I am quite familiar. Back around 1993-96 there was a surge at that hour. Mike McAlary, everyone from the papers, lots of police, some mob, a more colorful crowd you could not find anywhere else. It was a resurgence. There were no websites, and even if there were, Elaine had no idea what we were talking about. (Neither did we, really.) It was all about getting the papers after midnight, reading the papers, someone bringing in the Times front page right after it closed, checking bylines.

And it was all about Elaine Kaufman. Kids, we were not there just because the place was open late. We were there to brag and gossip and make some noise, and make sure Elaine knew how well everyone was going and what was going on. We were there to see her, and you waited — you waited– for her to get up from her chair at one table and saunter over to yours, plop down, and give your group ten, twenty minutes. The best thing was if she told Gianni to bring her some food at your table! Oh, fantastic, Elaine is going to eat with us. Now you know, she thinks we’re smart, she’s going to stay and talk and listen and nod and wave her arm from the elbow like the Pope.

Happy anniversary Elaine. I know you’re with Mr. Steinbrenner. The Yankees lost tonight, I’m sorry. But when the game was going badly. it always meant we were able to leave the Stadium early, drive down and eat dinner with you and watch the last inning on the TV in the bar. And the minute it was over, the tube was shut off, screen black, we’re not watching anything else. “Whaddaya gonna do?” Elaine would say, and a new topic of conversation would swallow the table whole.