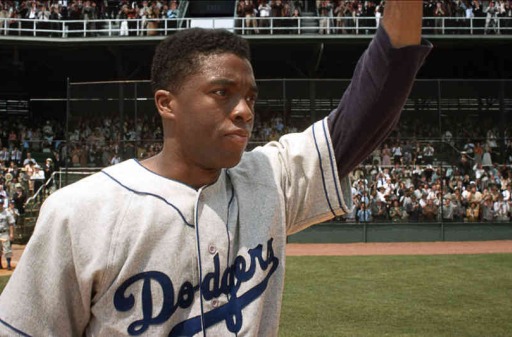 Watching the new film ’42,’  at times harkens you back to the hokey films of yore, yet at the same time the film’s compelling and triumphant story can’t help stir the insides and then bring a smile to even the most jaded moviegoer.  This story is a tough one to hit the right notes on, but Oscar winning screenwriter of “LA Confidential,” Brian Helgeland, does just that.  Helgeland brings the tale of baseball legend Jackie Robinson to life in good old –fashioned Hollywood style.

Chadwick Boseman, who plays Jackie, is a relative newcomer and is quite the revelation. Boseman doesn’t play a sainted Jackie, but a multi-dimensional one; with all his anger, albeit justified, in full force as well as his laudable otherworldly courage and strength.  Nicole Beharie plays his sheltered wife Rachel Robinson with loveliness and grace.  Harrison Ford plays Dodgers owner Branch Rickey ; he is a happy surprise. Audiences have not seen Ford like this, he’s the anchor of the film, a cranky, gruff and quipping rich man with a rock solid moral core that is the theme throughout and the strength on which Jackie so relied on.

There is also terrific work from the supporting cast, including Lucas Black as team captain Pee Wee Reese, Christopher Meloni as the troubled manager Leo Durocher and T. R. Knight as Rickey’s assistant Harold.  In addition, Alan Tudyk plays the literally loathsome, racist team manager of the Philadelphia Phillies Ben Chapman, whose unrelenting taunts towards Jackie actually had the opposite effect; it resulted in teammates circling the wagons around him.  The scenes of the verbal abuse are down right sickening.  Helgeland does not play it all safe.

The ugliness of the time and its language are not pink-painted over.  That is to his credit and that’s what makes this film so deeply affecting on so many levels.  Yes, it’s a tad too long, and some scenes required a bit more depth than was given to them.  ‘ 42,’ while not a home run, is a definite and tremendously gratifying solid third base hit.