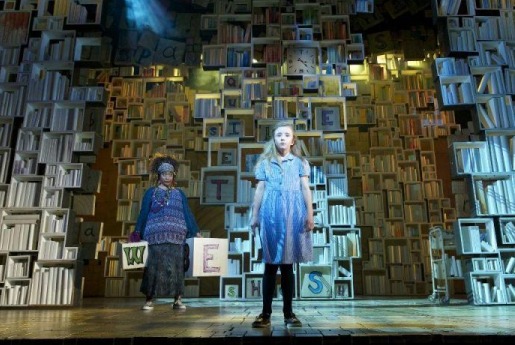 “Matilda” opens tonight on Broadway, adding itself to “Kinky Boots,” the soon to close “Hands on A Hardbody,” and “Cinderella” (a new old show). That’s four musicals, all original (since “Cinderella” was made for TV originally), plus “Motown: The Musical,” which some original material to augment the jukebox of classic hits. “Hardbody” may be closing, but that doesn’t diminish its many achievements. That’s the best field of shows in a long time, frankly.

I saw “Matilda” last night and I can tell you–it’s not what you expect. Around 16 children between the ages of 9 and 14 are its stars. There are adults, principally Bertie Carvel, a man who plays a woman, and who is really spectacular. The other adults are Gabriel Ebert, Lauren Ward, and Lesli Margherita. They will all be “names” on Friday morning.

So will the girls who play Matilda. Last night, Bailey Ryon played the first act and part of the second until she fell and hurt herself. The capable Milly Shapiro stepped in, picked up and finished the show. Both girls took bows. They, and all the children in the show, are so exceptional it’s hard to believe they’re not small adults. They aren’t.

“Matilda” comes from the Royal Shakespeare Company and the Dodgers. Matthew Warchus directs, and the set– which is like a giant world of Scrabble pieces for children– is from Rob Howell. The entire physical production, including school desks that rise out of the stage, is jaw dropping.  There’s one scene in which Karen Aldridge, playing Matilda’s librarian friend, sits on a cube as a fanciful scene unfolds in front of her. I thought, that woman must be thinking this is sort of amazing, as a complete fantasy appears before Matilda.

The show is dark, edgy, and not your basic family fare. It’s Roald Dahl without any sugar coating. Everything is played as if the kids are adults. No one is talked down to. Some kids in the audience loved it. Others looked like they needed a drink. In the second act, there’s a number that looks like 9 year olds are doing “American Idiot” crossed with “Spring Awakening.” But 90 plus year old legend Marge Champion, who I spoke to during the intermission, was aglow with praise. The choreography is mind bending. And these kids are doing it.

Did I mention the songs? What a year for songs– from Cyndi Lauper to Amanda Green to Berry Gordy and the Motown writers to Rodgers and Hammerstein. And Australian Tim Minchin has written some extraordinarily beautiful songs that are real songs. They’ll stick in your head. “Matilda” isn’t perfect. It’s a little too long, and gets some convoluted in the second act. But what a great job these people have done.