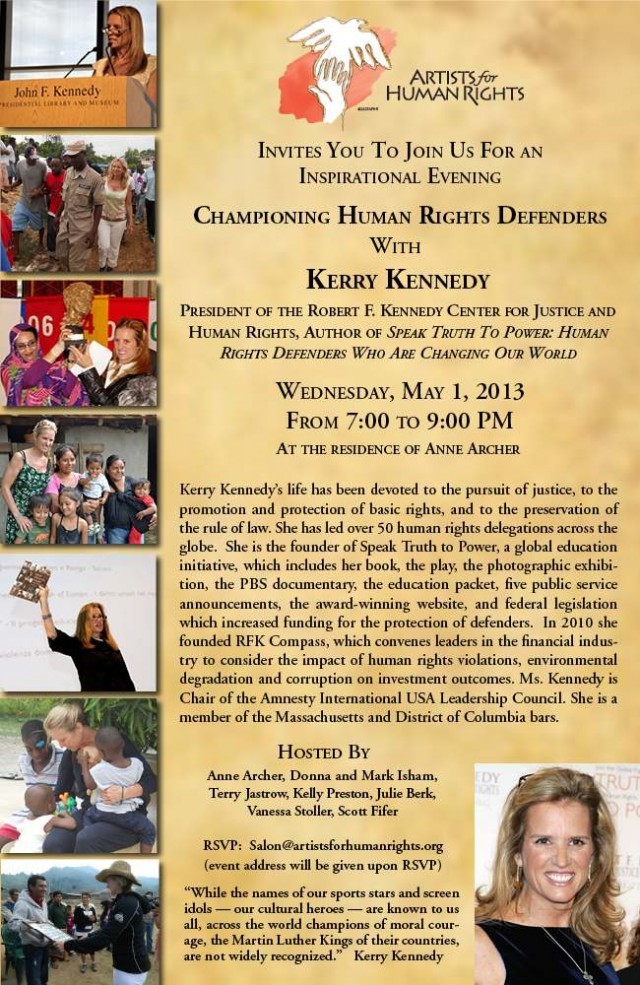 This is just about as weird as it gets. I’ve just been sent a copy of an invite to top Scientology couple Anne Archer and Terry Jastrow’s Hollywood home. It seems as though on May 1 the Jastrows are hosting a salon at which Kerry Kennedy, daughter of the late Robert F. Kennedy Jr and ex wife of New York governor Andrew Cuomo, will address the crowd. Kerry Kennedy is the featured speaker.

The other hosts are all Scientologists including composer Mark Isham and actress Kelly Preston (aka Mrs. Travolta). Archer and Jastrow have held this kind of salon before, and I’ve reported on it. The invitation says it’s for a group called Artists for Human Rights, which is a Scientology group. Kennedy is coming a spokesperson for the Robert F. Kennedy Memorial Foundation, named for her late father.

The story was first reported by the indefatigable Tony Ortega on his website, www.tonyortega.org. 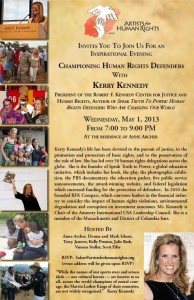 Kennedy is still awaiting word about her car crash last July 2012 in Westchester County. She claimed she’d mistakenly taken an Ambien and had fallen asleep at the wheel of her car. It hasn’t been determined yet whether will she stand trial. You would think Kennedy savvy would have steered her clear from Scientology. Archer’s son, Tommy Davis, was the chief celebrity wrangler at Scientology for years. But in the last couple of years, Davis and his wife–Katie Holmes’ former Scientology minder Jessica Feshbach–have disappeared from day to day operations.

Kennedy could easily had read Lawrence Wright’s new book, “Going Clear,” or the new book by Jenna Miscavige Hill– niece of the cult’s leader, David Miscavige– to understand the countless acts against human rights perpetuated by the organization. Why she’s going, and carry the RFK Foundation name with her, remains a mystery. As a devout Kennedy Catholic, she may have some questions for these Scientologists about Thetan, the afterlife, aliens, and where the others who’ve disappeared have gone.