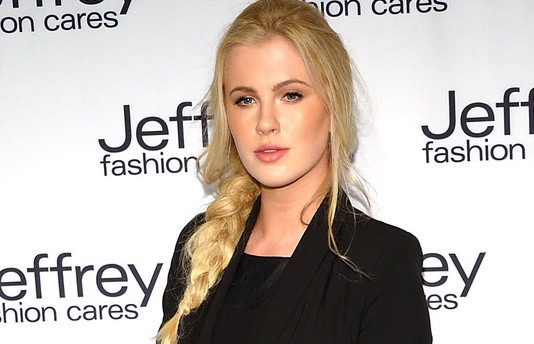 Where is Kim Basinger? Does she know what’s going on here in New York? Her 17 year old daughter with Alec Baldwin, Ireland, is the wild child of the week. Today she launched her modeling career, so to speak, in the New York Post. Not Vogue or Elle. But the Post, the paper Baldwin hates the most, fights with constantly. Where he was once dubbed The Bloviator. Where he took swings at their photographers. A paper he regularly lambastes.

And it’s not like Ireland cut a deal where the story would just be about modeling. Oh no. The Post ran at least two sidebars dissing Alec, just for good measure. They rehashed the incident in which he called Ireland “a thoughtless rude pig” on the phone several years ago. What a birthday gift!  He turned 55 two days ago. He’s expecting a new baby this year with his 27 year old wife, Hilaria.

Maybe she’s getting back at him now.

Meanwhile, Ireland is also advertising her affair on Twitter with a 19 year old surfer dude named Slate Trout. Yes, I can’t make up that name. If she married him, she’d be Ireland Trout. Like Scotch Salmon. Something like that. Shouldn’t this girl be in school?

Meanwhile, Alec is on Broadway in “Orphans.” And he seems to have adopted brother Stephen’s religious awakening. This is what Alec wrote on Easter Sunday on Twitter. No one said parenting would be easy. Baldwin will need good prayer access to get through Ireland’s rebellious period, that’s for sure:

Happy Easter to all.The teachings of Christ are a blessing in my life.